Saturday was race day.  The race didn’t end up being a grand fundraiser as I’d originally hoped it would (next time, I’ll plan ahead a little better!), but it was still a fun day to fulfill a personal challenge.

After picking up my BIB and t-shirt the day before, I got everything ready to go for the early morning start. Clothes depending on morning weather, play list created, phone charged. I needed to leave my house extra early to be there in time for the start. (especially knowing there would be traffic)   And wanted it all out and ready to go, so I could sleep as late as possible!!  Yellow and Pink.  J’s colors. It’s in her nursery, it’s in the bracelets that were made for her, and well, I really think yellow is gonna be her color…in addition to pink, of course!  (L’s was Green and Pink.  So I had to add the sock.)

I really was running for my girls. 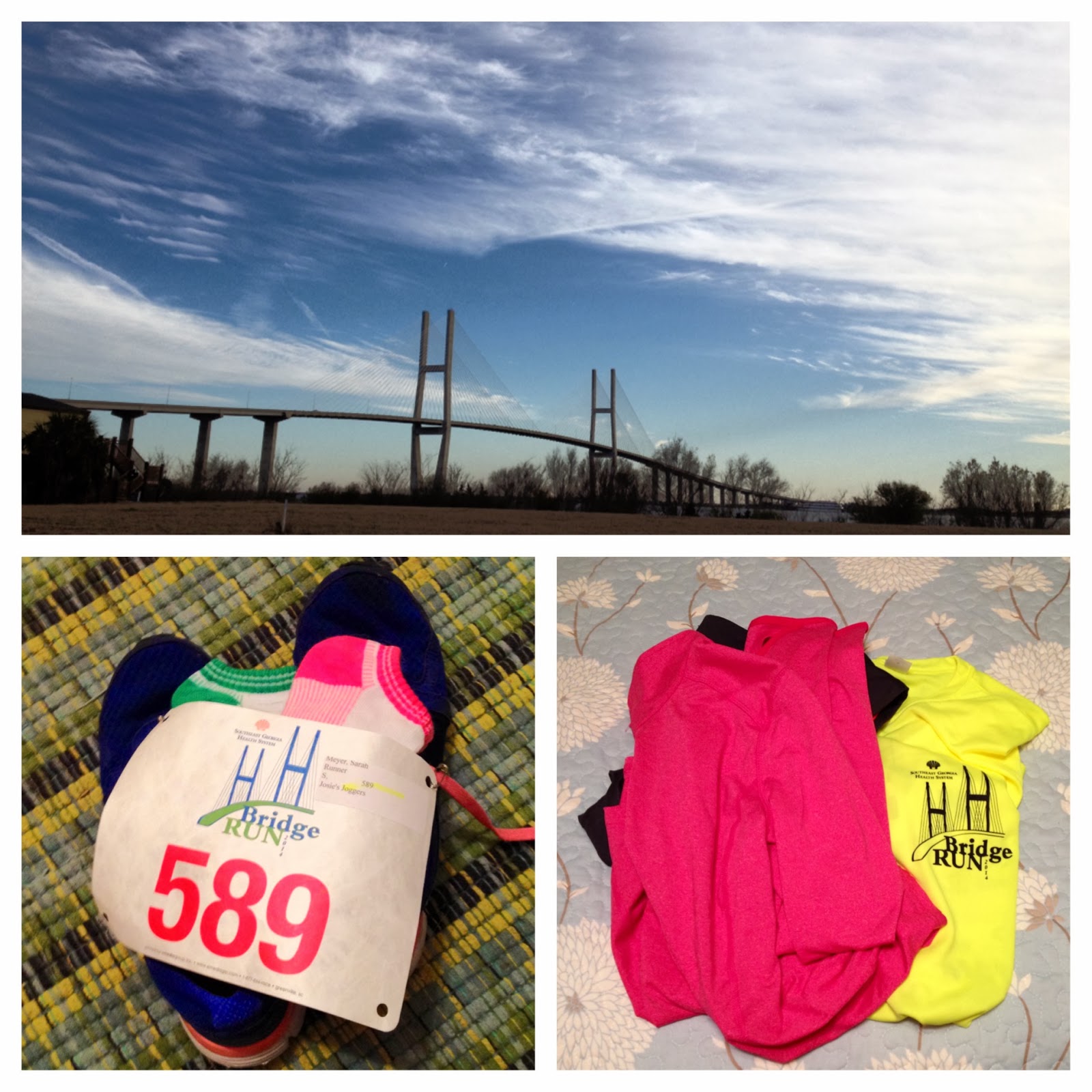 I woke up to rain…blah!  Not looking forward to running the bridge on wet pavement!  But it quickly ended and by the time I left the house a short time later, it was looking to be a gorgeous sunny morning! 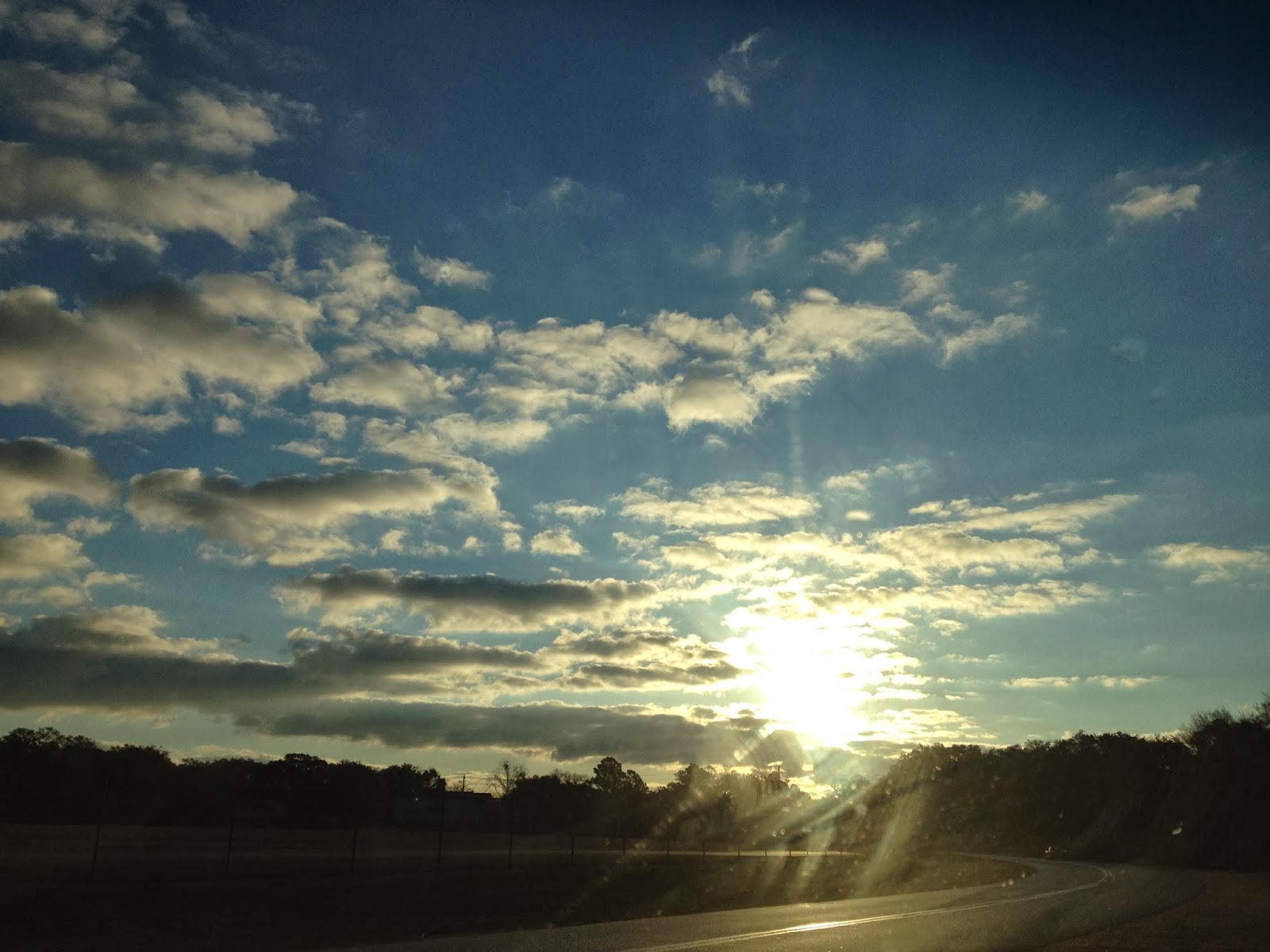 I think that’s a view I can enjoy while running.
The parking line was CRAZY.  So much for early arrival.  I sat in line for almost an hour!!! 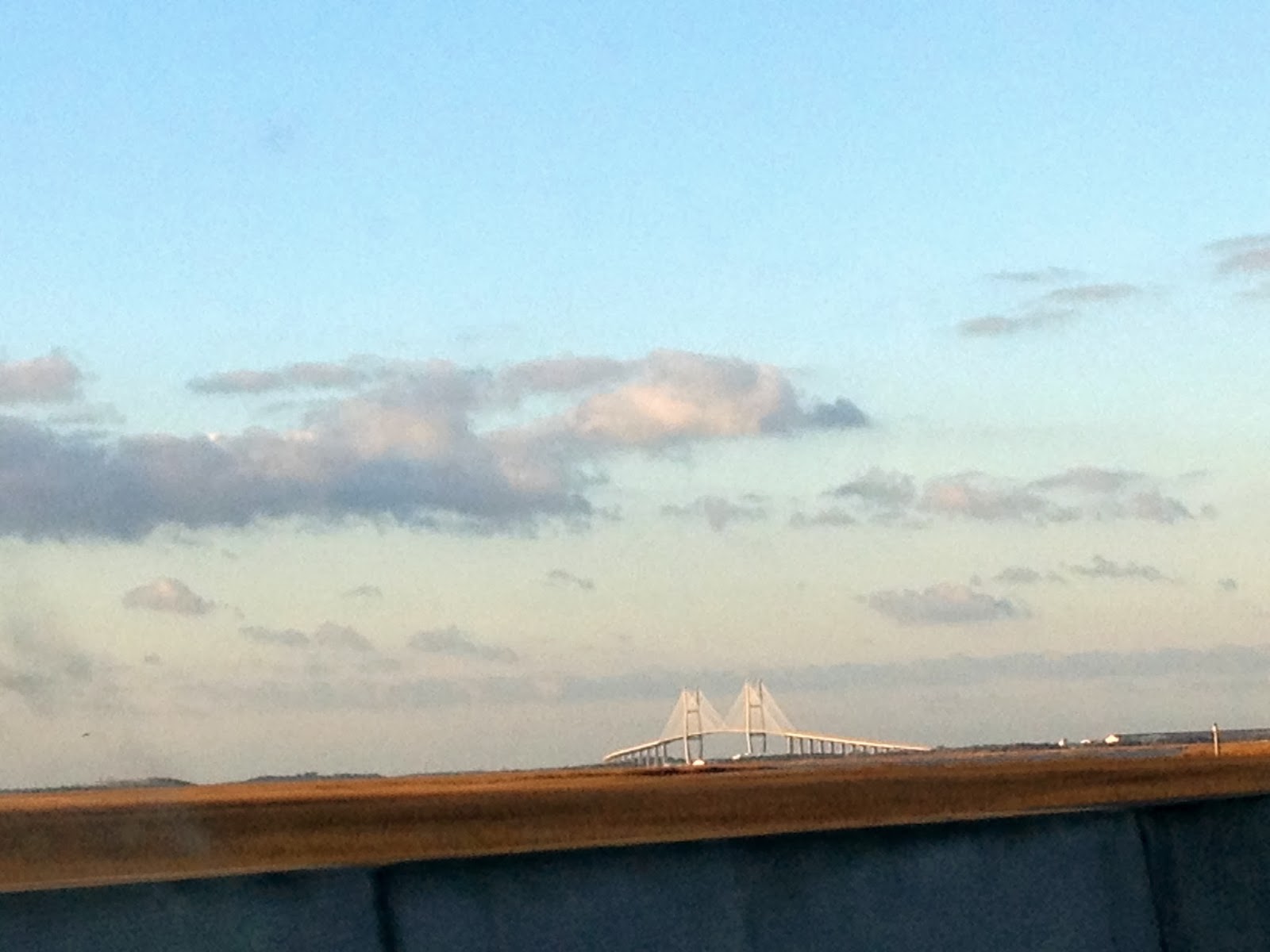 At least the scenery was beautiful while sitting in the car.
But I still made it on time, got a little warm up in and a had time for few more pics! 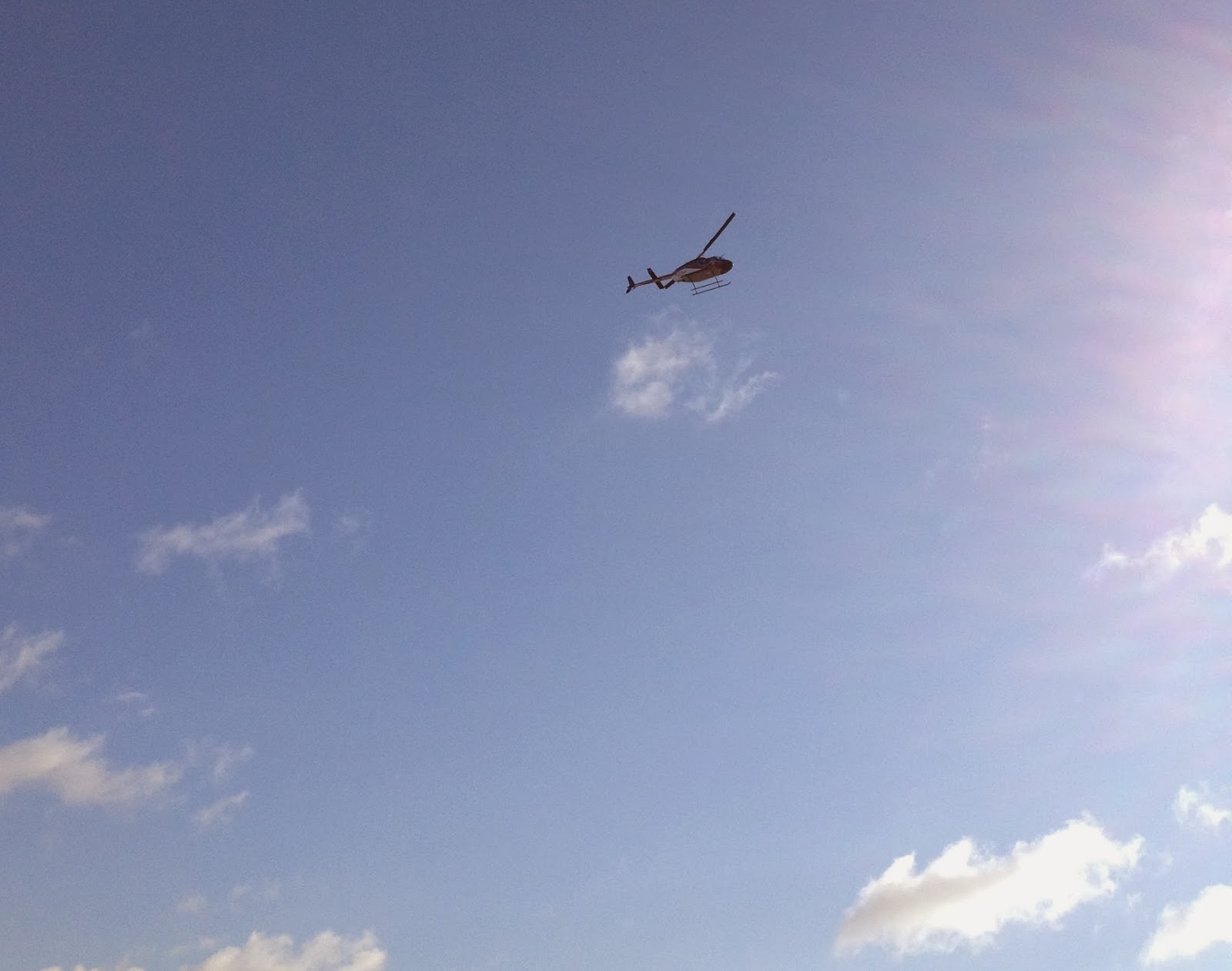 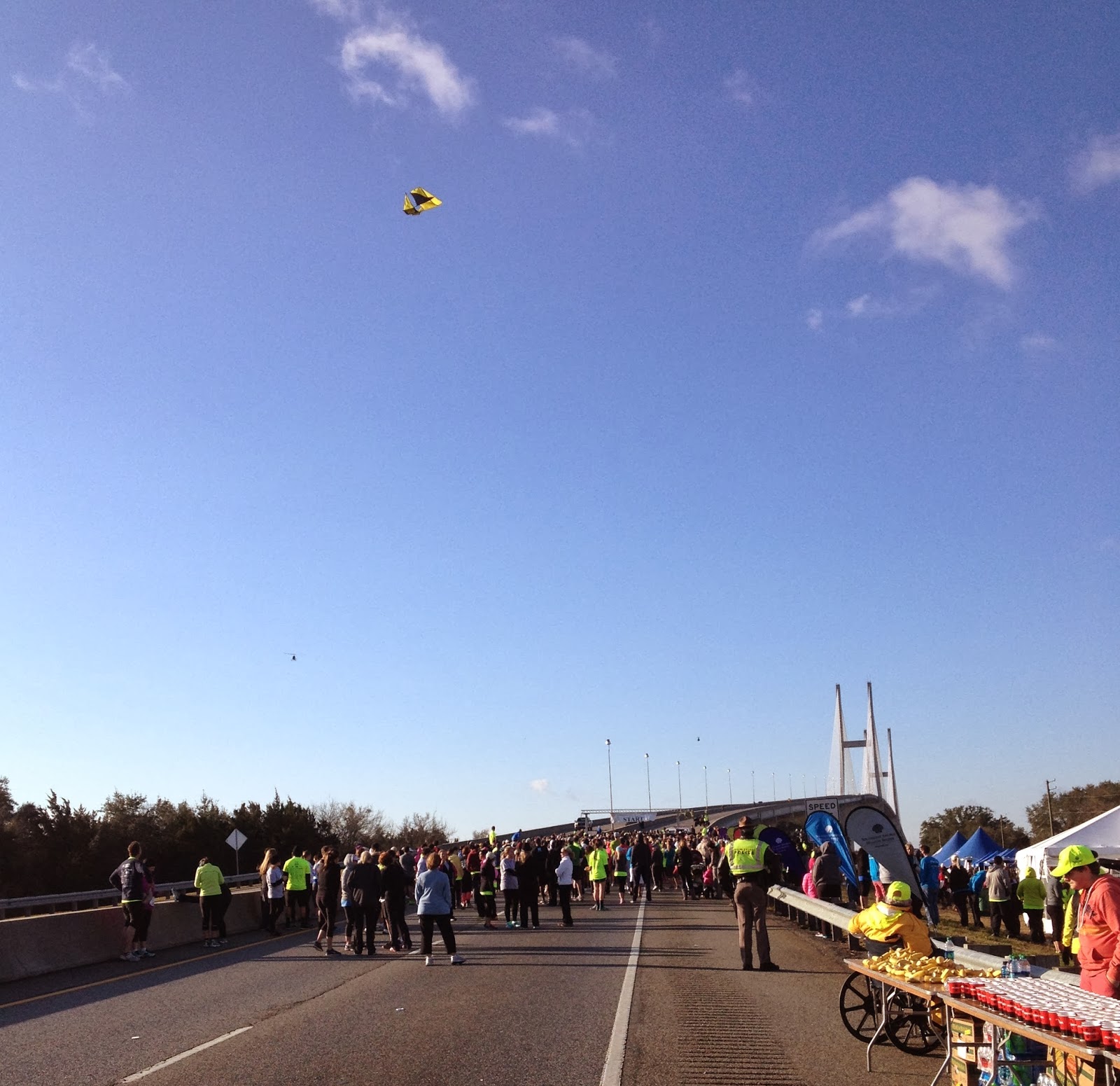 This kite had a camera attached.  And the man attached to the other end, followed the runners.  He truly got a birds eye view of the event.  The helicopter was hovering throughout the morning.
It was apparently a well covered event.
I started in the last 1/3 of the pack.  Which was okay, I knew I wasn’t running really to compete.  My main goal was to run the entire bridge (no walking) and not be last….*wink* 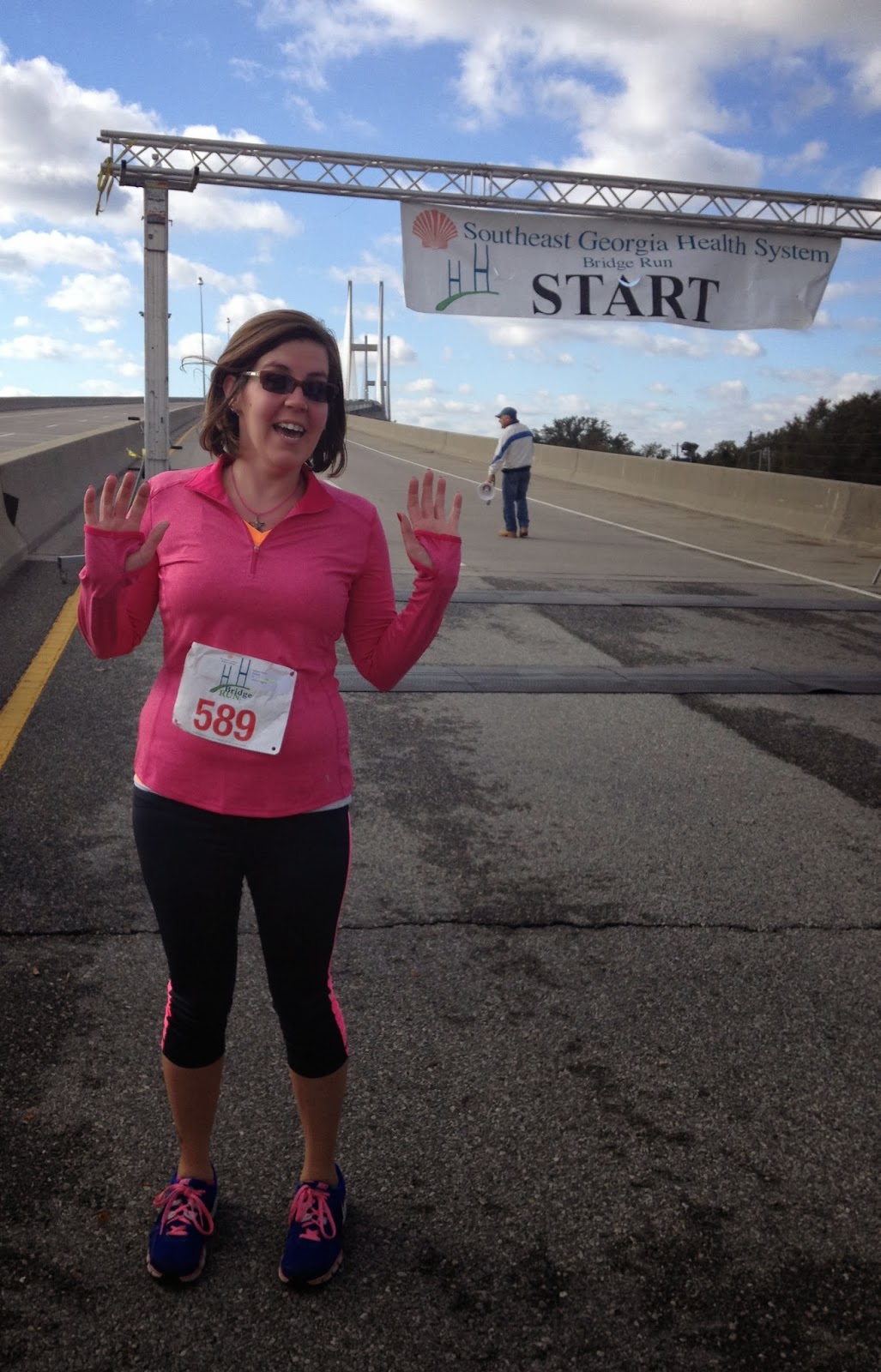 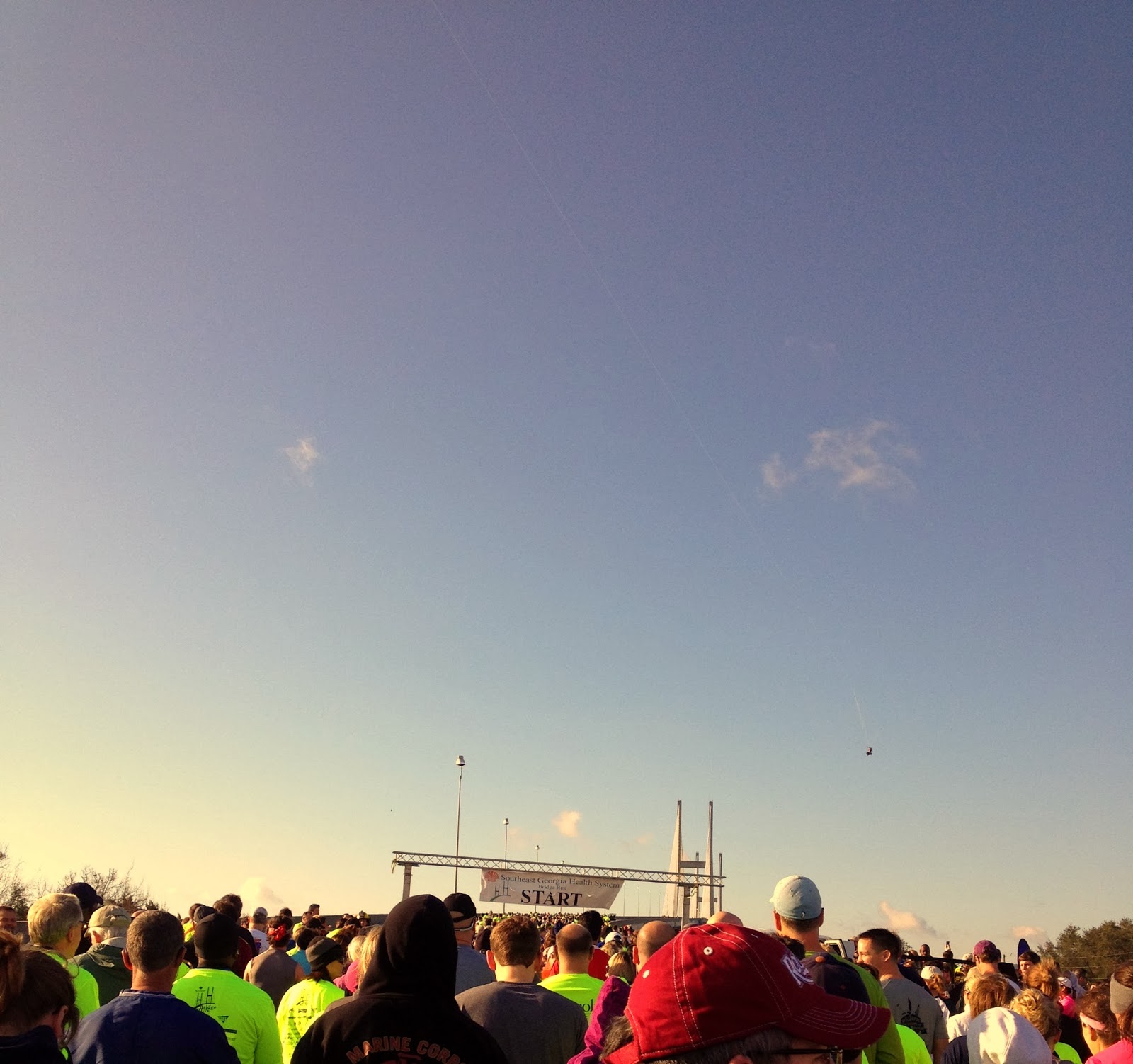 It felt a little like being in a herd of cattle…. because I’ve been in a herd of cattle and should know what that feels like, right?!?… but what I imagine being in a herd of cattle would feel like, happened at the start of the race.  I was weaving in and out of people trying to set my pace at first, then found a few ‘buddies’ who seemed to be keeping the same pace and away we went.  The first uphill was really not bad.  I actually snapped a few pics while I was jogging up.  And got chuckled at as I was passing by a few walkers with the phone up taking pictures.  Multitasking at it’s finest! 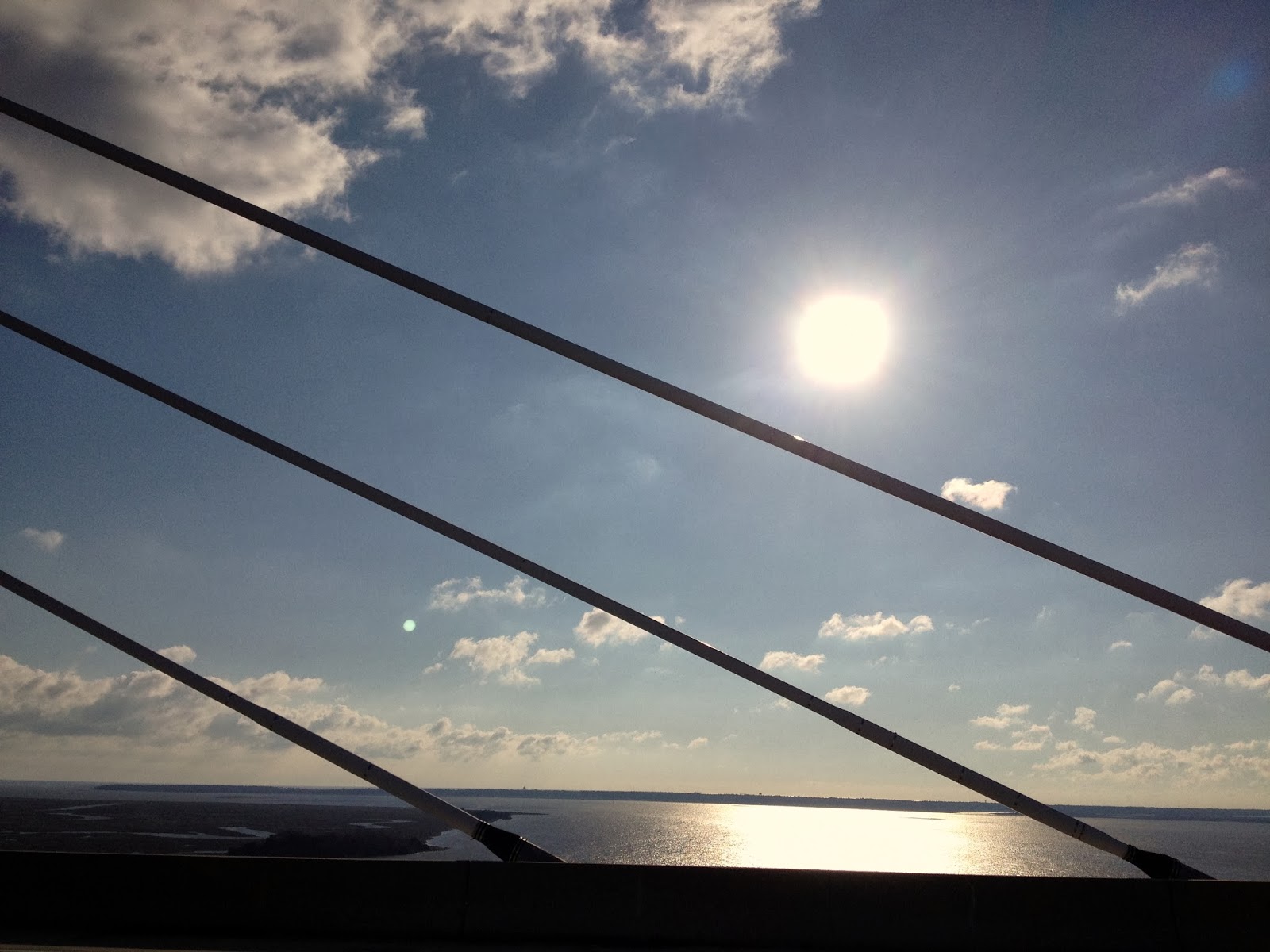 I did pause slightly at the top to get a clear picture.  It was hard to not to keep looking to the sides while running because the view is simply amazing.  The sun was shining, the tide high, birds chirping and a few boats below.  It was REALLY windy though.  Good old ocean breezes.
At least I never got too hot while running. 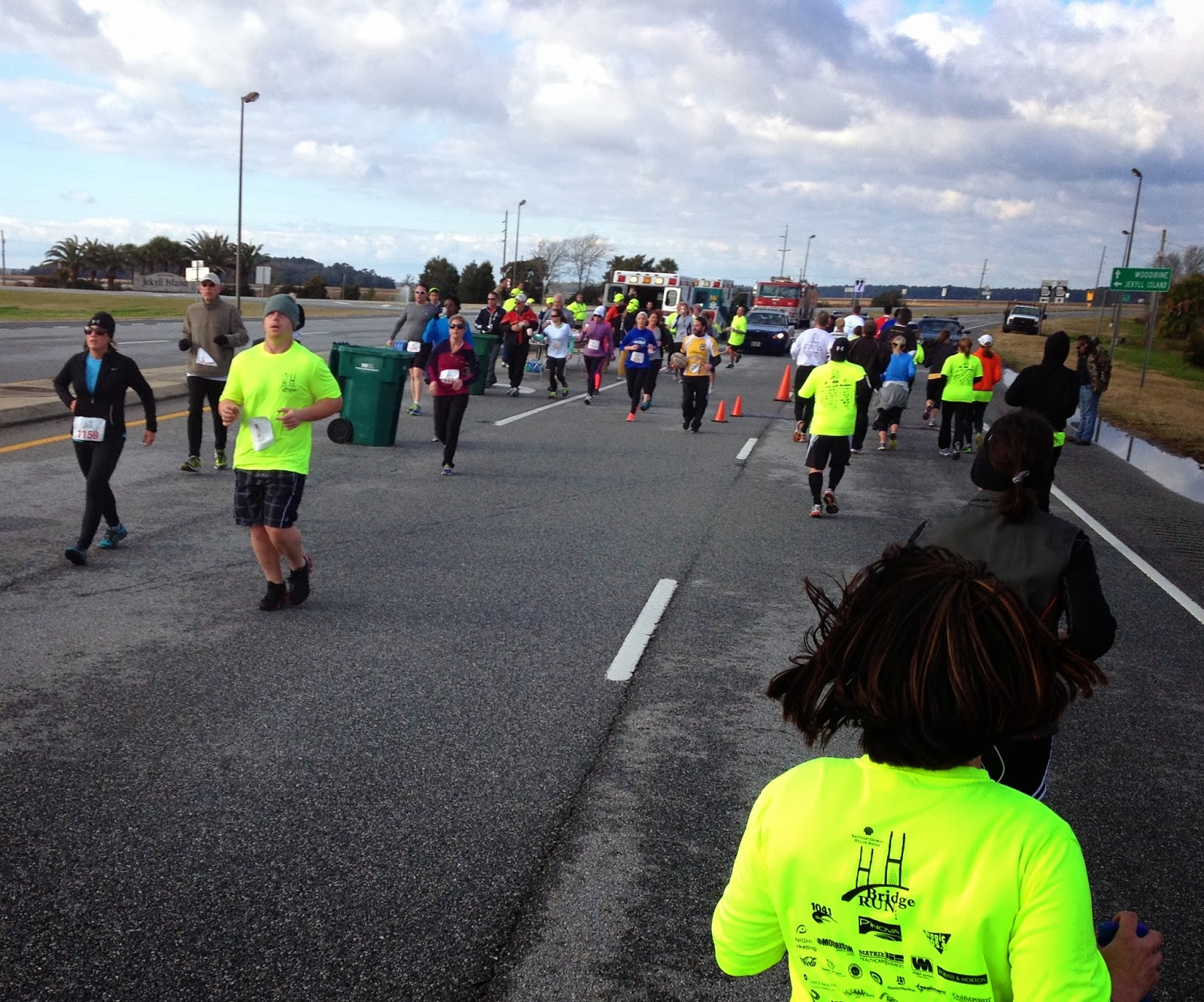 There was a water station at the bottom, at the turn around, after the downhill kick.
It was a good spot before having to head back up again. 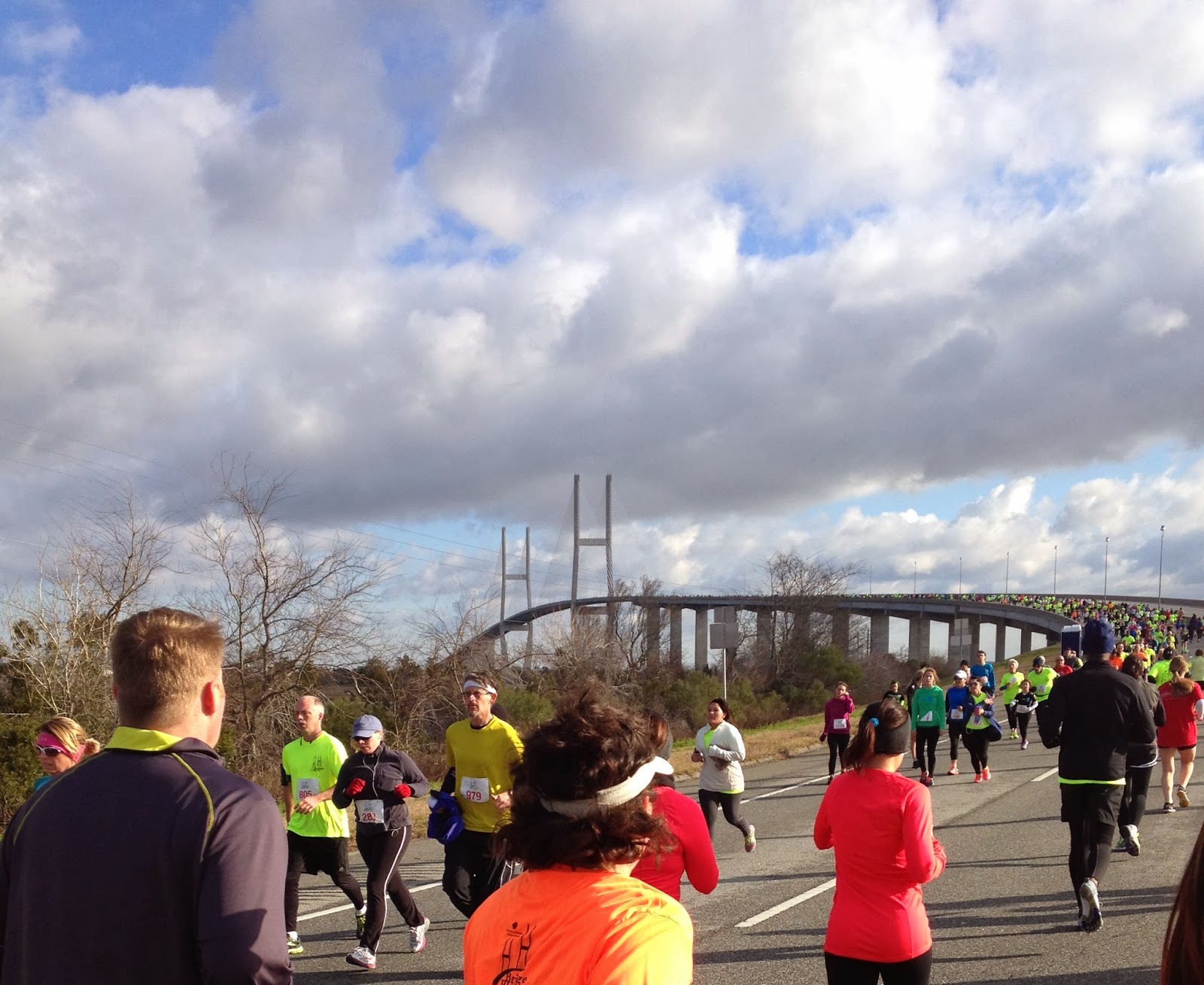 For a split second, my head thought… uh, the top of that bridge sure does look far.
Then I looked right, and watching this view made it seem to go by quickly. 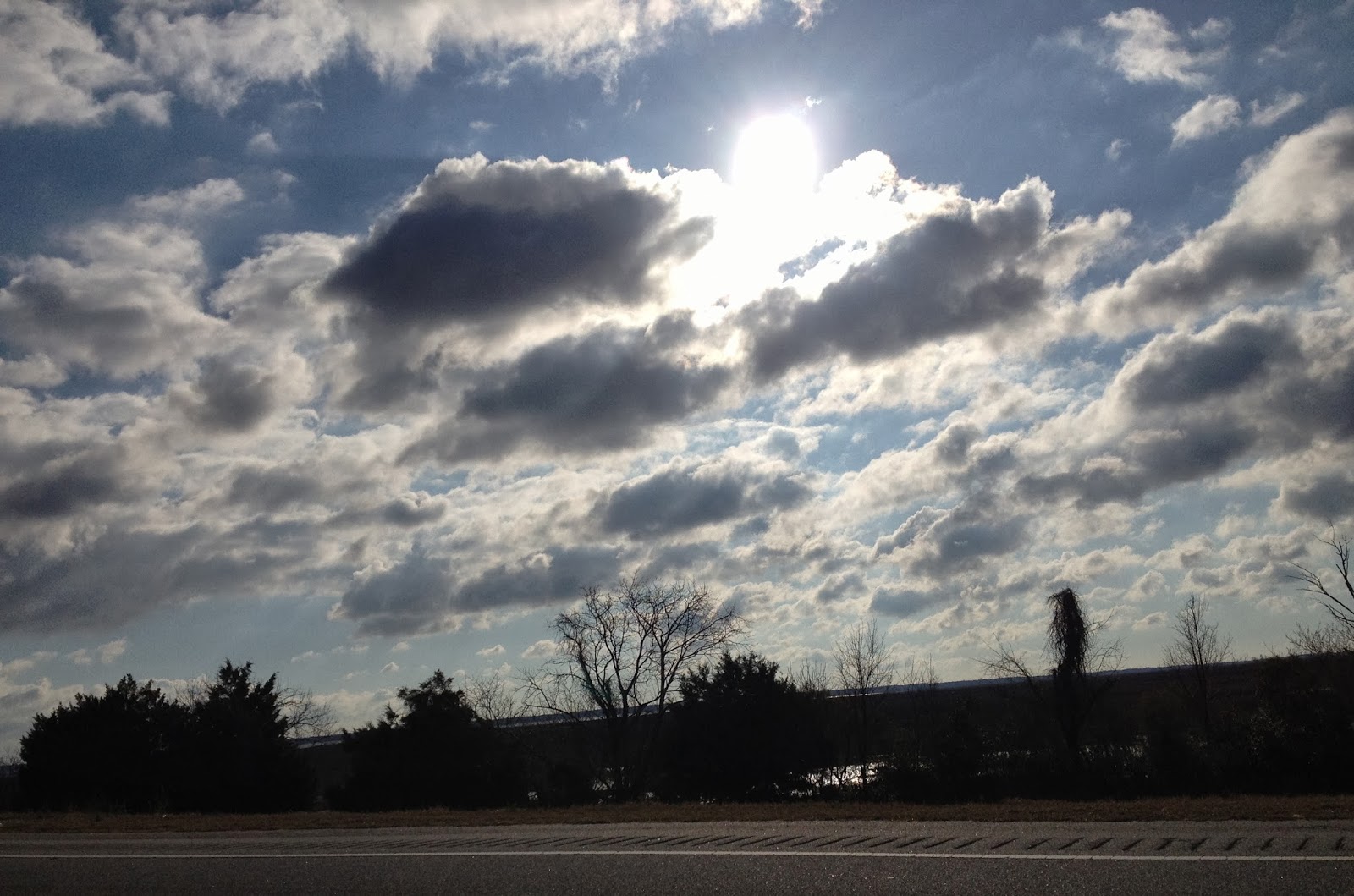 I will admit my time over the first leg was a little over a minute shorter then the second leg.
That second climb was a little tougher.  But the view at the top was just as amazing.  Ah, that sky… 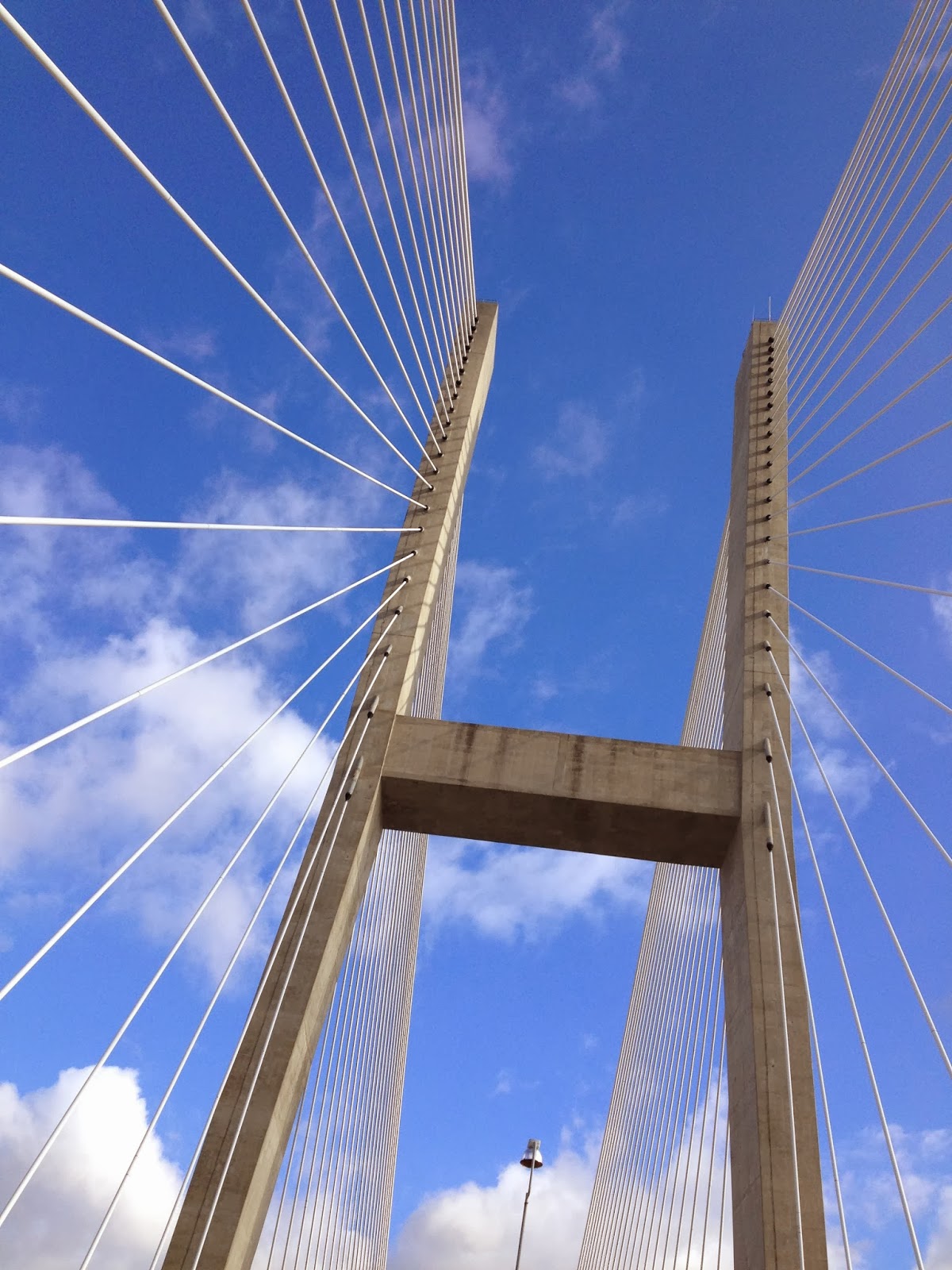 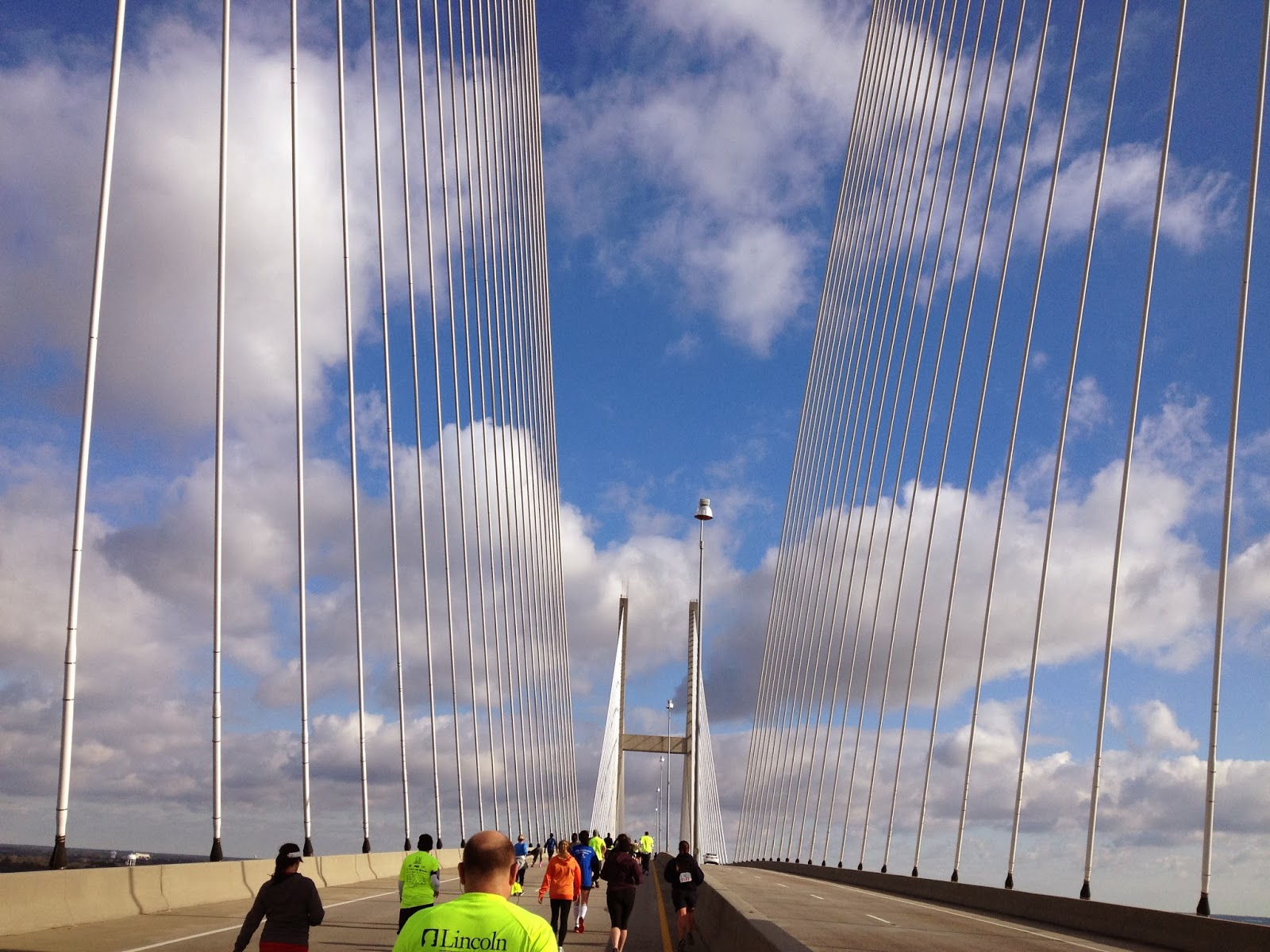 There was a band set up at the top, and a small ‘cheering squad’.  It was fun to have that little boost before heading back down.  I really had convinced myself that I just needed to make it back to the top,
seeing as then I’d just be running downhill and letting momentum do the work to the finish. 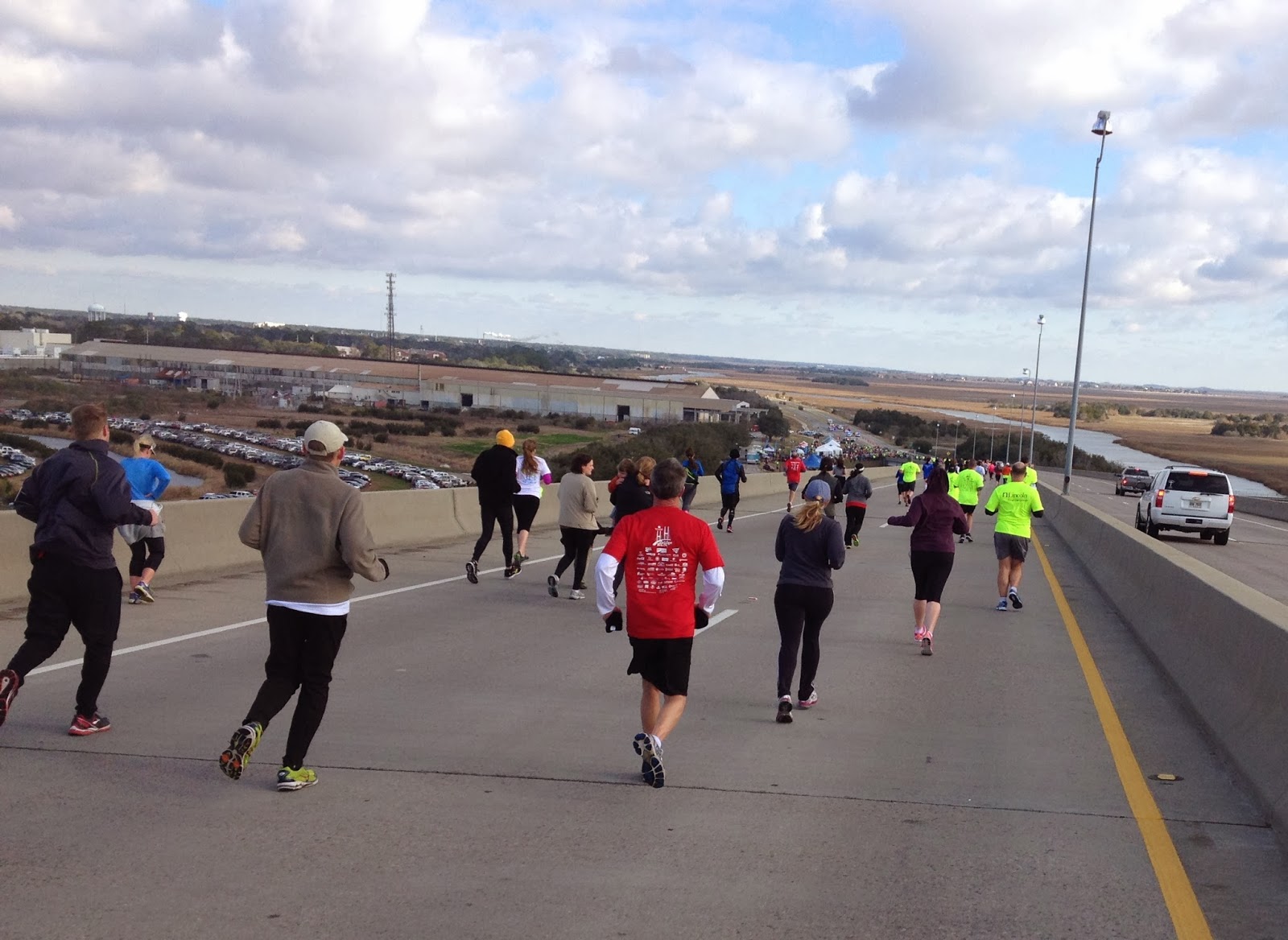 The last 1/4 was probably the easiest, which is odd to say about a run. 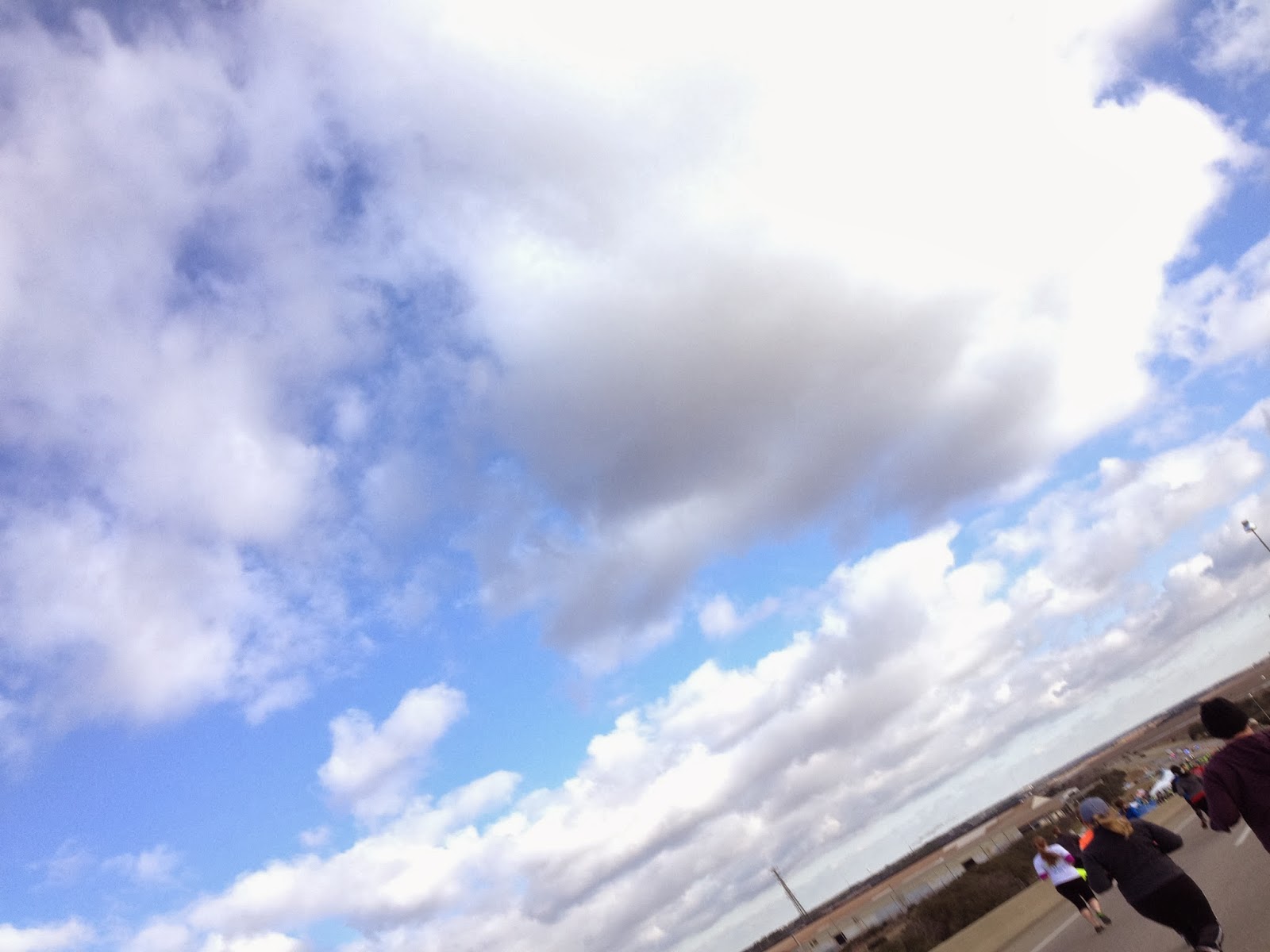 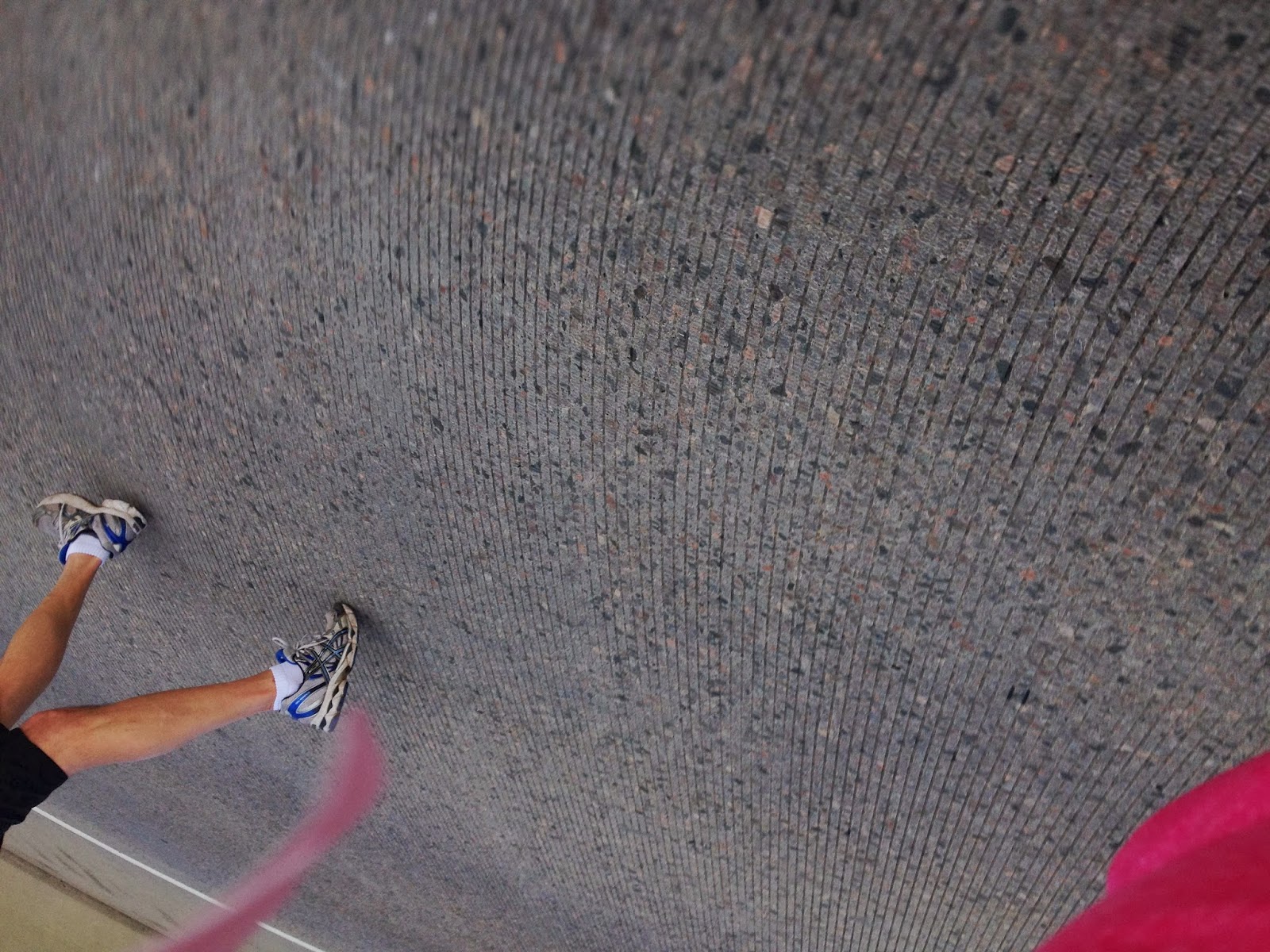 I’m really not sure what these two pics are about?  I guess this is what happens when you’re trying to run, take pictures and put your phone back into the arm band, all at the same time? 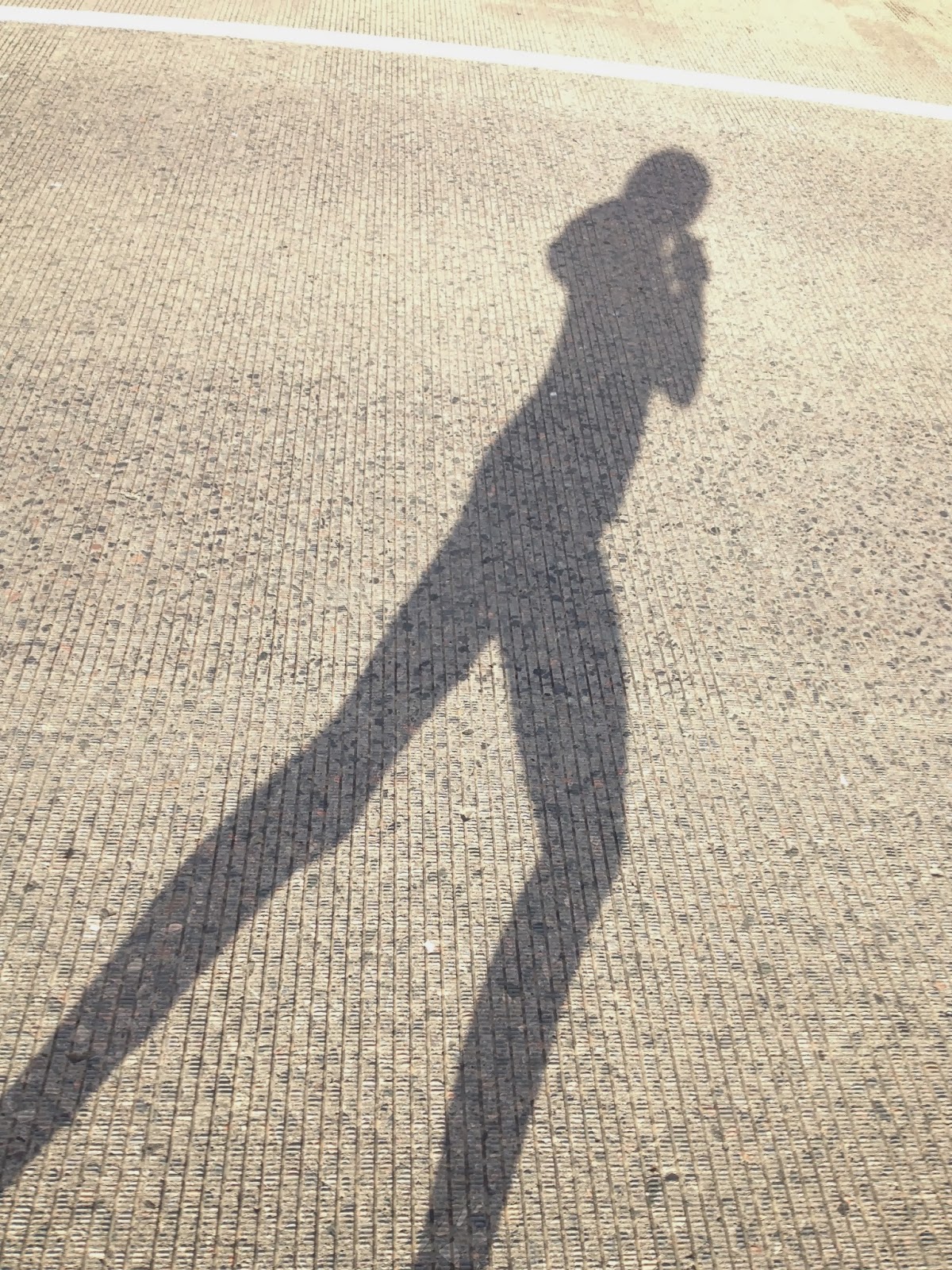 I loved watching my shadow (is that vain?).  Gosh do I wish my legs were really that long.  Shadow me would be able to reach things on the top shelf all.the.time. 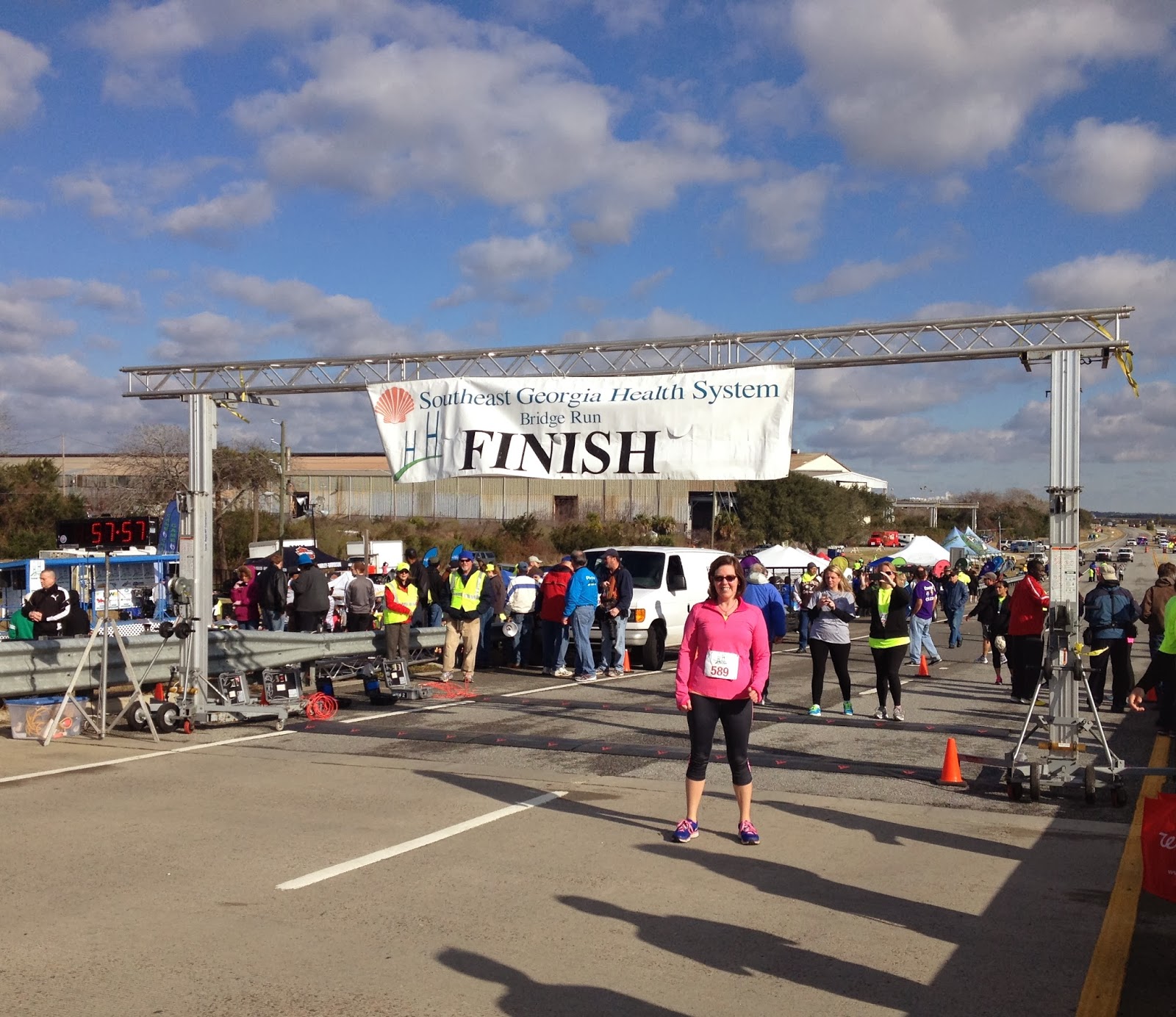 I was too focused on my finish to get a ‘crossing the finish line’ picture.  But I was able to go back afterward for a photo shoot.  It was nice to cross under that sign at the end.
And hilarious to pass these signs…. 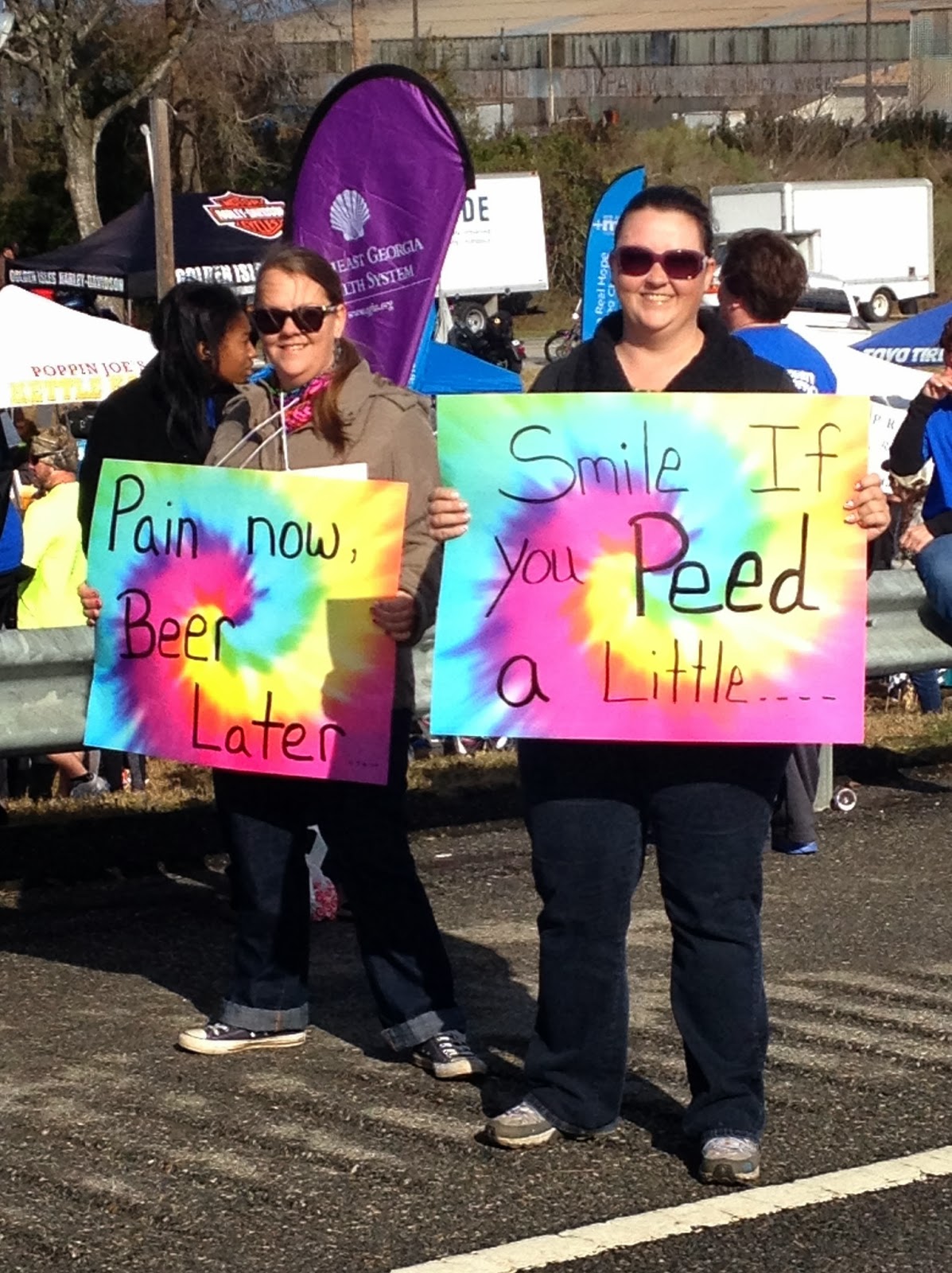 editors not….Yes, I did smile, but no, I did NOT pee,
and I filled my beverage cup with some nice cold Vitamin Water
(to take my pain killer with).  *wink*
Today was the first check mark to the start of a resolution. It’s a little strange, if you asked me 3 years ago, if I would be running over a bridge and back, or even running a 5K of any type, or really running.at.all.  I probably would have laughed.  There are a number of things I wouldn’t have guessed
would be happening in my life right now.
I wouldn’t have thought I’d be a mere couple of months away from bringing my daughter home.
I feel like running this bridge was a pretty good illustration to the adoption process.
You start fresh, well rested, warmed up, energetic.
Going uphill is tough, but you’re set on getting to the top and
excited to see what’s on the other side so you keep chugging along.
Once you get to the top, there is this bit of relief.
You pick up momentum going down the other side.
The water break at the bottom is refreshing, a little boost before starting back up the hill.
That second time up is harder.  You think you might not reach the top.
It seems sooo far away, even though you’ve already come so far.
You’re more than halfway there, but it’s a struggle.
You can only keep focused on the end on what or who, is waiting for you at the finish.
You reach the top for a second time and it almost seems like you’ve forgotten EVERYTHING else in the world, except for what is at the bottom of that hill.
And that downhill rush is just that, a rush.  A whirlwind of getting to the finish.
You almost don’t realize you’re still running,
because you’re simply using the downhill slope to keep you moving.
Except you feel like you might need to slow down so you don’t fall,
but you really can’t slow down…
or you might fall.
And then you see the sign.
It’s right there in front of you and you kind of want to cry and laugh (and maybe puke) all at the same time.
Going through that finish is such a sense of relief.
Only to realize that, gosh, you’re exhausted now.  Relieved, you’ve finished, excited because you did it,
but so tired. And a little in awe of what you just accomplished.
You walk around to cool down.
Still in that rush of completion, but now starting to feel the ache of what the process really was.
And the joy of having completed it.
Now you can’t wait to share with everyone and…
You might even be looking into how soon you can do it again.
This was a good run.
This IS a good run.
I feel like I’m at the top of the hill, waiting for the downhill momentum to kick in and
that final rush toward my Josie bunny.
What a finish that will be.

Complete Circles: A girl and her pony