I am not certain how often I will be able to update while I’m here, especially once I have the girl in my arms! She will, of course, take priority over the blog.  But I know a lot of friends and family are VERY excited that this moment is finally here and are waiting on pins and needles to get an update and to finally be able to ‘see’ her. 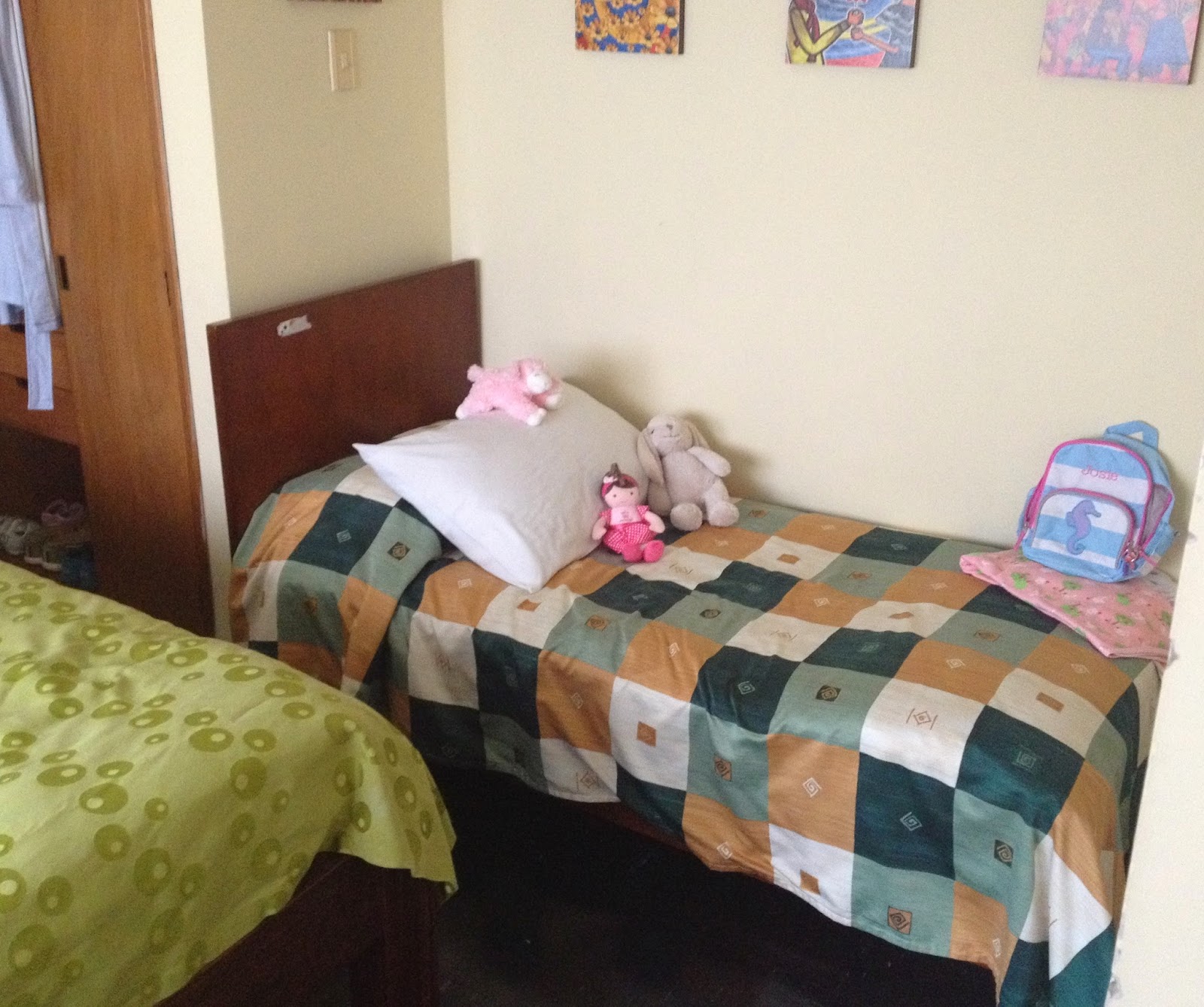 I arrived late last night and Zuetana (the hotel where I’m staying) is pretty great!  The owner has been beyond gracious – bought a few groceries as I was coming in late, met us after 10pm to be sure I got settled, just very friendly!  The room is sort of like a small apartment.  It has a bedroom, living room/kitchen area and bathroom.  There is a big king size bed in the room and also a small bed just for J.  Right now it doesn’t have the rail on the side, but the owner is getting that for me tomorrow, so J will be safe in her own little bed!  (And she’s also bringing a new highchair for us to use!)

Her bed is right at the corner of mine, so she’ll be easy to reach in the middle of the night.  It will really all depend on how she adjusts as to where she actually sleeps.  We are certainly going to attempt for her own bed, but especially the first night or two, if it helps her transition, I have NO problem keeping her in my bed and getting to snuggle! 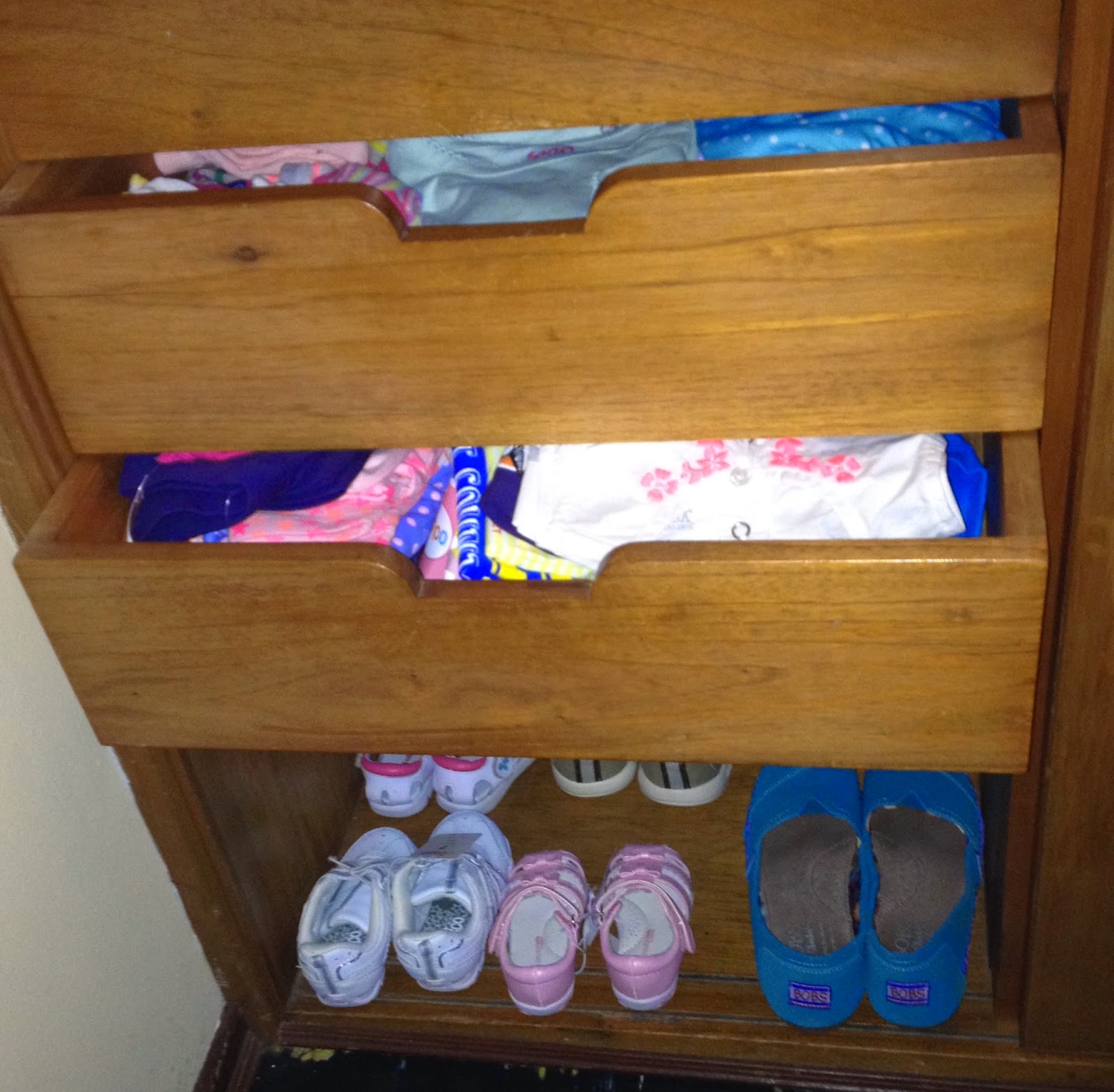 I got everything unpacked.  (And for those of you who like to tease me for unpacking…at least this is an 8 week trip!!)  Her shoes are put up and all of her little clothes in the drawer.  And entire shelf for headbands and bows.  (I may have over done it slightly in the packing of the hair bows!)  A good southern girl needs to have some decent bow choices…I’m just starting her off right!

I also got a little ‘tour’ of sorts today by one of the staff.  He walked me around to the various parks, the mall and the grocery store.  It was very nice to have a guide for my first venture out and for my first grocery purchases.  He is also emailing with events that will go on at the hotel.  As in, they have a cooking class once a week to teach us non-Colombians how to make things like empanadas, patacones, beans and rice, jiaco (potato and corn soup), arepas and more.  J doesn’t really eat solid food yet, but it will be nice to know about some of the traditional foods from her birth country. She likes things mushy that she doesn’t really have to chew.  It sort of stated this on her paperwork but the representative that is helping with all of the meetings, transportation, and well, everything, told me on the ride to the hotel that she was visiting the orphanage last week and helped feed J (and another boy who’s parents will be here soon!).  She said J is very good at singling out the chunks in things and spitting them right back out. (A picky eater? Must be my kid!)  So glad I brought a couple extra bibs!!! (and a dozen food pouches!)

There are a few other families here right now, some at the end of the process and some at the beginning, and a couple more arriving in the next couple of weeks.  A few of them are from other countries but I met a dad from North Carolina who has been here for one week now with their new 11 month old daughter. (She was napping, so I haven’t met her yet).  And another family from the states is arriving soon (I think next week). But it seems like a very family friendly atmosphere.

There is actually a holiday tomorrow so the encounter date has been pushed back one day.  Not a problem, I can be patient for one more day.  Though, I can’t explain how hard it is to know I am actually in the same town as my sweet bunny and can’t go kiss those cheeks.  BUT Wednesday will be here before we know it.

I get to spend tomorrow simply enjoying the town.  Maybe some sightseeing? Meeting other families?  Who knows, just a day to relax.  Then on Tuesday I will go with Soraya (the adoption representative) to get my cedula (Colombian I.D.) and do some other paperwork before getting the girl.

I will try to update as soon as I can after the trip to the orphanage.  But it will all depend on my daughter’s sleeping habits!

The only negative thing from the trip this far is my lack of Spanish.  Which is entirely my fault.  I should have found more people to practice with before traveling.  I do know basic words (and was able to get on the right plane at the right time when the airline spoke only Spanish!) but it is a little intimidating while walking around and going into stores when you really don’t know what people are saying.  I did bring both of my learn spanish programs though and will certainly try to pick up more and more as I go!  I have had Disney on (in spanish) whenever I’ve been in the room.  I figure maybe I’ll learn more by osmosis…it will just soak from my ears into my brain and I’ll be able to understand everything!!  Tip to ANYONE else in the process of adopting in Latin America…learn.the.language.  That being said, the staff all speak english pretty well, as does the adoption rep.  And I have phone numbers if I ever get stuck I can call for help!  Did I mention the people are so wonderful!!!

Our living room – there is a bit more space between the table and couch than the picture shows.  And our kitchen area.  Plenty of space to prepare meals for two.
On an off topic side note:  I have not had a coke (or any caffeine) for 24 hours..>
withdrawal might be kicking in!!