Today is our one week ‘anniversary’, so to speak.  I picked up J one week ago today.  And wow, what a whirlwind of a week it has been.  She’s still a little under the weather, so we haven’t been out and about too much with any real sight-seeing, yet (minus our walk to the mall!).  It’s been nice to just be together and get to know her.  Some moments it seems like it has been much longer then a week, but others seem like it was just yesterday that I was anxiously sitting in the little waiting room, knowing that any minute someone would be walking through the door with my daughter.

Gosh, I love those words….My Daughter.  I thought I was so prepared for this feeling of becoming a Mama, but I admit, it is the kind of love that is simply not explainable and I really don’t know how anyone could be fully prepared to love someone so much.

Her personality blossoms each day.  I do think she is thriving on so much undivided attention.  Sometimes, though I think she gets a little overwhelmed.  It almost seems comforting to her, for me to simply let her hang in her bed for a few minutes and let her soak things in or to let her play alone on the floor at times.  She has a habit of sucking her tongue.  Like a baby would suck a paci, but she uses her tongue.  I have found it to mostly be a comforting habit.  She does it when she’s tired.  And I’ve discovered when she’s a little unsure or anxious about something or someone.  I try to keep an eye on that when we are interacting or when we’re out and about.  It’s a good cue that she might need some down time or is just unsure of where we are or who we’re with.

For the most part, she will still go to anyone.  I do think she recognizes me as someone ‘different’ (and better) than say, the random taxi driver that brought us to our last appointment.  But at the same time she had no qualms when he picked her up out of her seat as I was gathering my things.  She does give looks to people when she’s not sure and has, a few times, laid her head on my shoulder when a random stranger talks to her and she’s unsure about them.  I will take that as a positive sign, that even though I don’t think she understands (yet) that I am Mama.  I do think she has gotten to the point that she feels safe with me.  And that is a good first step. 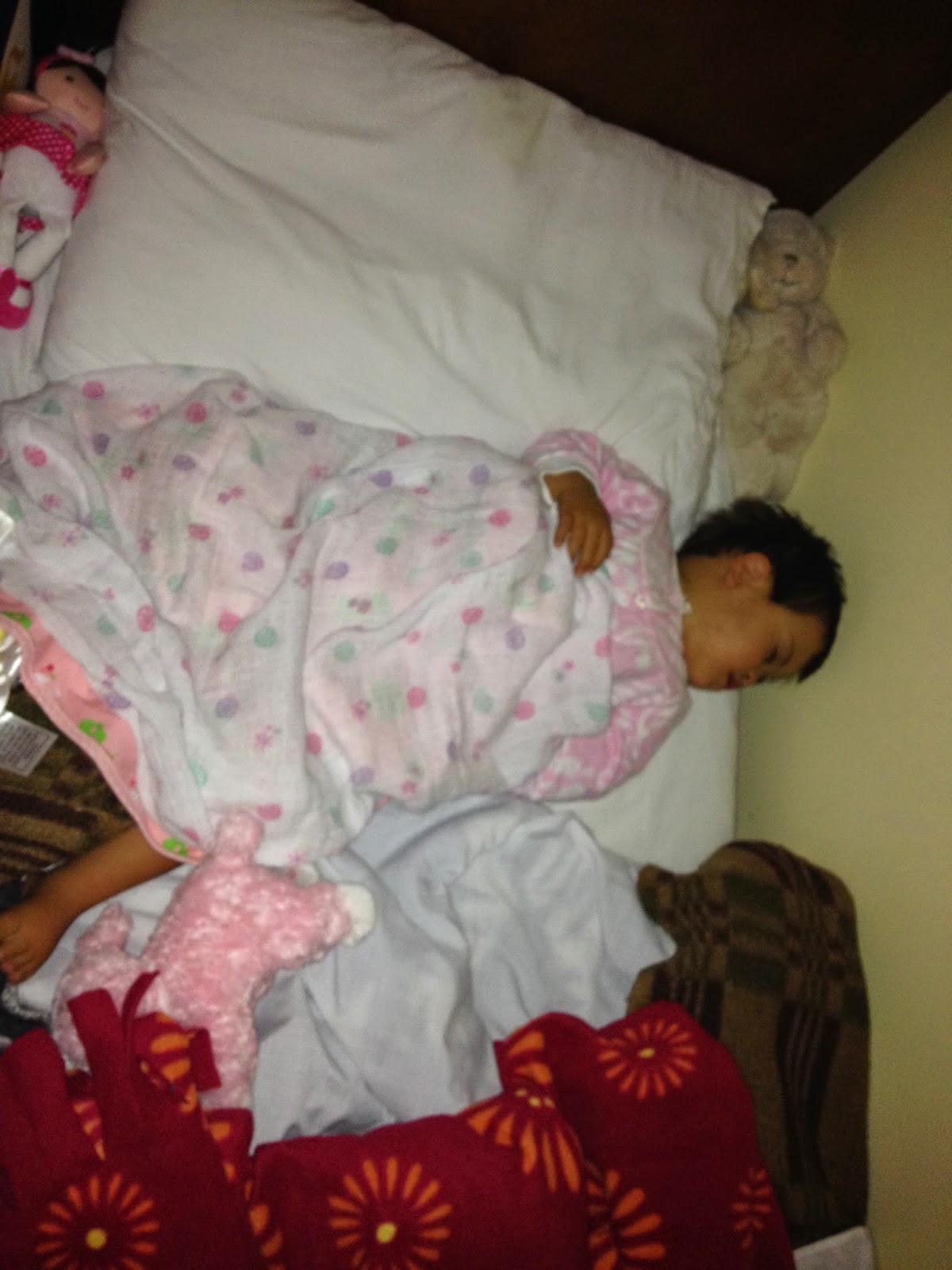 It’s been nice learning her ‘noises’ and faces.  I have slept a little better the last night (or two) now that I’m familiar with what seem to be ‘normal’ sleeping noises.  Even though I still hear her ‘growling’ and tossing and rolling in her sleep, it doesn’t really wake me up completely as I know now, it’s just something she does. She babbles a bit, especially if she’s ‘reading’ something.  It’s so fun to hear her ‘talk’ to herself.  She blows raspberries when she gets really excited, accompanied by some hand waving.  I can tell she really likes something if that’s the reaction.  And she has an amazing….’Awe’ face.  Lights, noises, bubbles, music.  Those are a few of the favorites that get the ‘awe’ reaction!  I think the girl could blow bubbles all day (while sitting in the bathtub, with music playing in the background….throw in a disco ball and I’m sure she would think she could spend the rest of her life that way!!!)

We have Integration tomorrow.  Our first, ‘official step’ of the in-country process (after the initial encounter of course!). This is a meeting that is set up by ICBF for them to basically check-in on how the bonding process is going. What is going well and what difficulties might a family be having.  I also get to ask more questions that may have come up over the past week, while getting to know J.  (Or those that I forgot to ask during our encounter…ya know, I was not preoccupied or anything!!)  If ICBF decides the match is going well, then we get to start the court process! Hooray! Sometimes they do set up a second meeting if they feel it necessary, but I think they will be happy with how she is doing.

I’ll let you now how the meeting goes and if we’re going to be officially on our way to getting assigned to a court!  And that’s a BIG assignment to pray for.  Some courts are more in favor of adoption, some not, some work quickly, some take their sweet time…and you simply get assigned a court by a draw.  There is no way to ‘choose’.
So, if the Integration meeting goes well, please be praying we get assigned to a good and quick court!!

Giving thanks during National Adoption month