Today was a pretty big day!  The driver picked us up about 10:30 to meet Soraya at La Casa at 11:30!   Since, I am staying a bit on the north end of town and the rep and ICBF and La Casa are more south, we were picked up by the driver, and just met her there.  After our first meeting, she took us for a quick lunch and then to the notary and then to our final meeting.  The driver picked us back up at the rep’s house and brought us back to the hotel.  Soraya is a pretty busy person and we are about 45 min drive from her house.  She has gone out of her way to make this process run so smoothly while we’re here in country so I’m absolutely fine saving her a trip and using a driver instead.  Plus, he’s a super nice guy who speaks English and is very willing to answer all of my many questions about Colombia and Bogota and the culture!
I had written a little about Integration in a previous post, but basically,  this was our first, ‘official step’ of the in-country process after the initial Encuentro. It was a meeting that is set up by ICBF for them to basically check-in on how the bonding process is going. What is going well and what difficulties a family might be having.  I met with the psychologist that was from the orphanage where J was living (her psychologist actually) and we talked all about Josie and how she was doing.  I was able to share some of the great things of the past week and some of the things that have been a little harder or things I just wasn’t sure about because well, I really don’t know her.

It’s quite a bit different than bringing home a newborn.  J is a little over 3 years old.  She has spent most of her life with these people, following their schedule, eating/drinking meals they have prepared, doing activities they had planned.  Her expressions and little nuances are things that they are familiar with, things that are already a part of her, that now I get to learn.  Of course, there will be changes and additions and especially given that she is getting so much one-on-one attention, she is changing and growing in positive ways that she couldn’t over the past three years.  BUT as much as an orphanage is not a place for a child to grow up, these people loved her, they cared for her day in and day out.  They cried when I picked her up last week.  They miss her.  And I’m sure a little part of her misses them.  Even though she is blossoming so much outside of that place, it is ALL she had known!

I was able to ask more questions about J and her schedule, and things that have come up over the past week, while we’ve been bonding.  Things that I had forgotten to ask during our encounter and things that I think will be helpful for her day to day living.  The psychologist shared more about her history.  Which, I don’t feel is something that needs to be shared here, but some things about her short little life bring tears to my eyes and make my heart sad whenever I hear about them. She is such a little fighter.

We will be going to visit the home where J had been living in another week or so.  I have a few things for the people who took care of my girl for her first few years and a few things for the other kids and most importantly, I want  them to see (and the psychologist agrees) how happy and loved she is….as my daughter.  I want to be able to personally thank them for caring for her and for loving her to the best of their ability so she could survive her first three years and so, I could find her and bring her home.
It was a little interesting watching Josie react to being back at La Casa and seeing those people.  She didn’t seem afraid or nervous, but wanted only me for the first 10 minutes or so.  (Which I think made the psychologist a little sad.)  But, I think after a few minutes J realized that I was staying put and started to warm up a little bit.  She did get a little bored/fussy toward the end, but the meeting began at what should have been lunch time and then after lunch, a nap.  Since we were going to eat and then had other places to go she really was off schedule and only ended up with about a 20 minute nap in the car from one place to the other. Which made her even more snuggly/clingy at the second meeting.  And I’m not gonna complain about that one bit.  It certainly made a good impression on the staff that the child that I’d picked up only one week ago, wanted nothing to do with any of them and only wanted to snuggle in her Mama’s lap!! (seriously, they were quite pleased with her bonding!!)

It was a very informative meeting, with laughter and tears, and ended very well as they are quite pleased with how things are going and we ARE now going to begin the court process.  Our lawyer will take the paperwork and present it to the courts by the end of the week, to be filed and ‘heard’.  This is a big step.  As I mentioned in a previous post, there are a variety of courts, some good, some not so good.  The not so good doesn’t mean things won’t happen, it just means they happen very slowly and sometimes with more info requested.  The good means things usually happen quickly and nothing else needed.  I, of course, am praying hard for a good court.  (And would appreciate any prayers you want to send specifically for this!!)  I’m confident thought, that no matter where we get assigned, I have got some awesome people on this team.  I have a rep who gets things done (and quickly!) and a lawyer who has been very pleased with our process and how well J is doing and will work hard to make sure things move.  In the mean time, we wait.  Even if we get a good court, it will still be a few weeks, but a good court could mean 5/6 weeks whereas a not so good could mean 6/7.  I am enjoying my time here, but would really prefer 5/6 more weeks, not 7!
Soraya (in all of her awesomeness) reassured me that she has friends in all the right places!  One of those being a woman (who just happened to walk into the same little place where we were eating) who used to be over all of the judges and still apparently has a influence.  And is also good friends with my agency representative.  I really do believe that God puts the right people, in the right place, at the right time.  (That being said it may be His plan that we are here for 7 more weeks, and if that’s the case then we’ll ride it out!)  I will be sure to update and let you all know once I find out.
I don’t really have any pictures of our meetings today.  It occurred to me after the fact that I could have asked Soraya to take one after our meeting that we’d officially passed Integration, but it was such a business type meeting that I didn’t even think about it.  We did drive through some amazing scenery on our way to Soraya’s house though, and I did try to get some photos from the car.  And there are always pics to be had of my darling girl, just being herself! 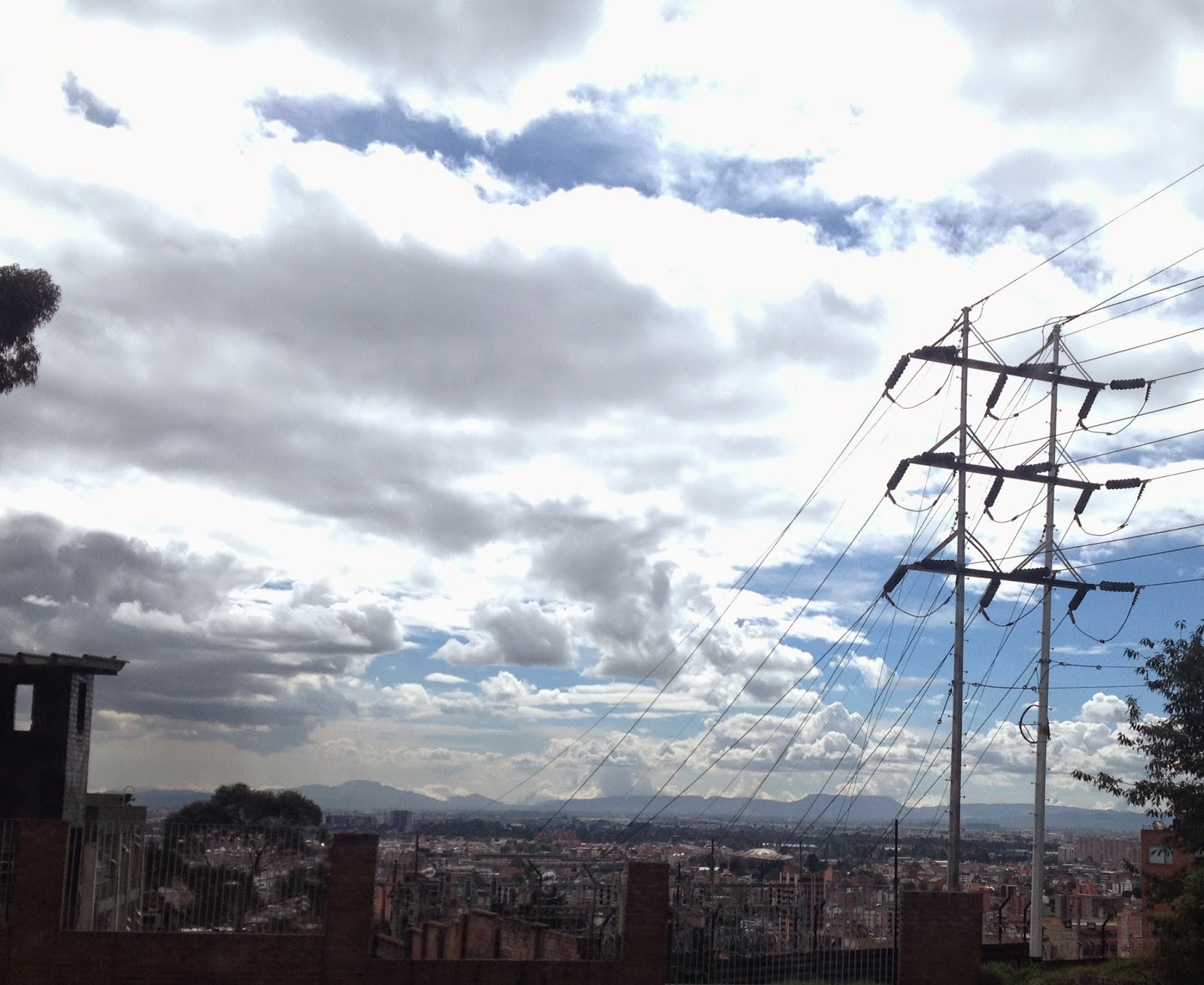 Soraya lives kind of on the side of a mountain.  It’s a really good neighborhood and there is a part of the drive that you can literally see across the entire city to the smaller mountains on the west side.  The amazing thing is that even though it seems like you’re viewing the entire city, this is really just a very small portion from East to West.  Bogota is HUGE!  And you really can’t even see the mountains on the West side, when you’re down in the city.  I asked and she said that yes, there are still moments that she looks at that view and is still impressed. 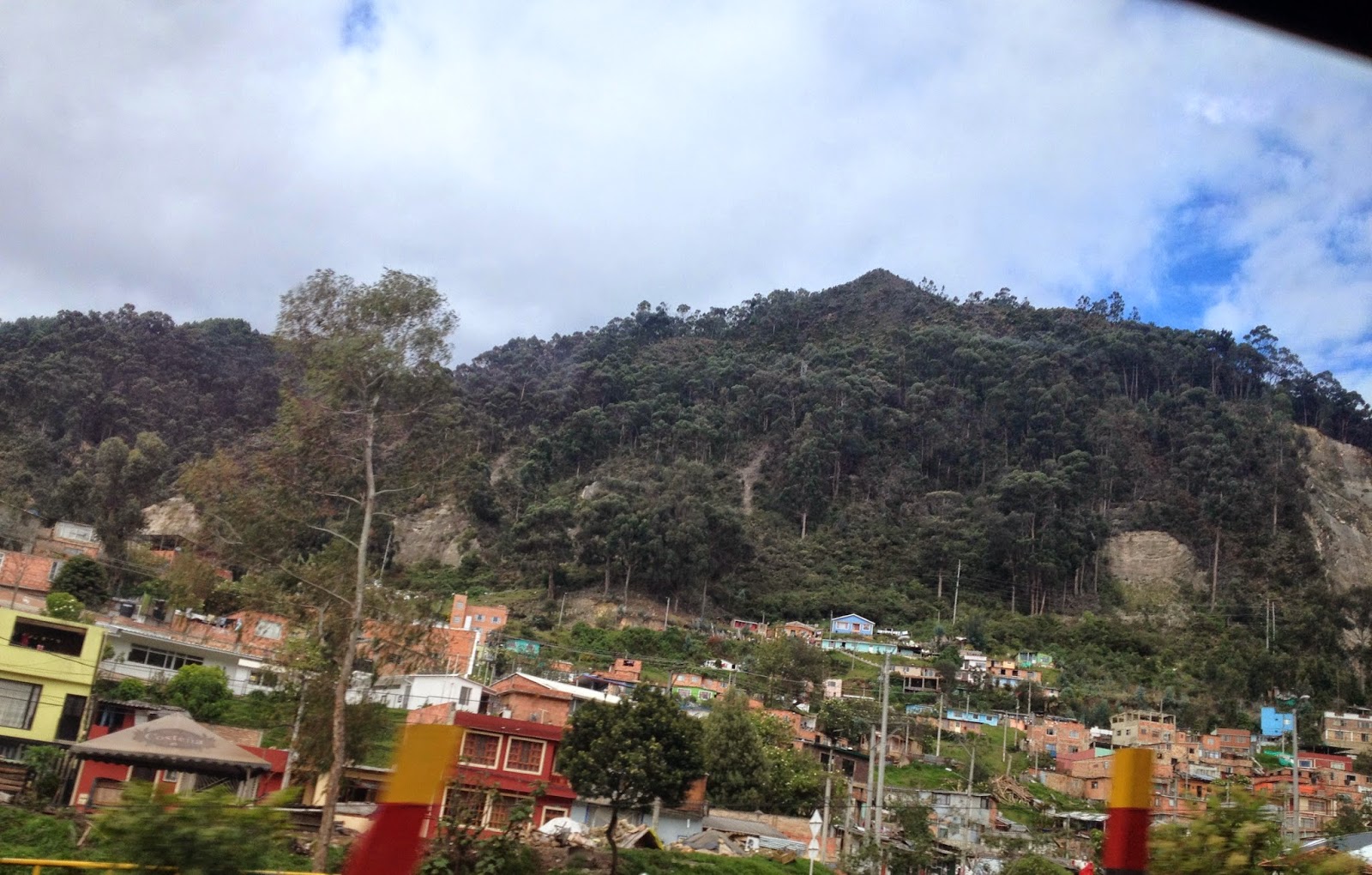 This is one of the little villages on the side of the mountain, that I see from down in the city and it is so tiny from down there.  It’s a lower class little village, but still some colorful houses.  And it was neat to see a bit more ‘up close’.  (Even though some of those houses are still a ways away!) 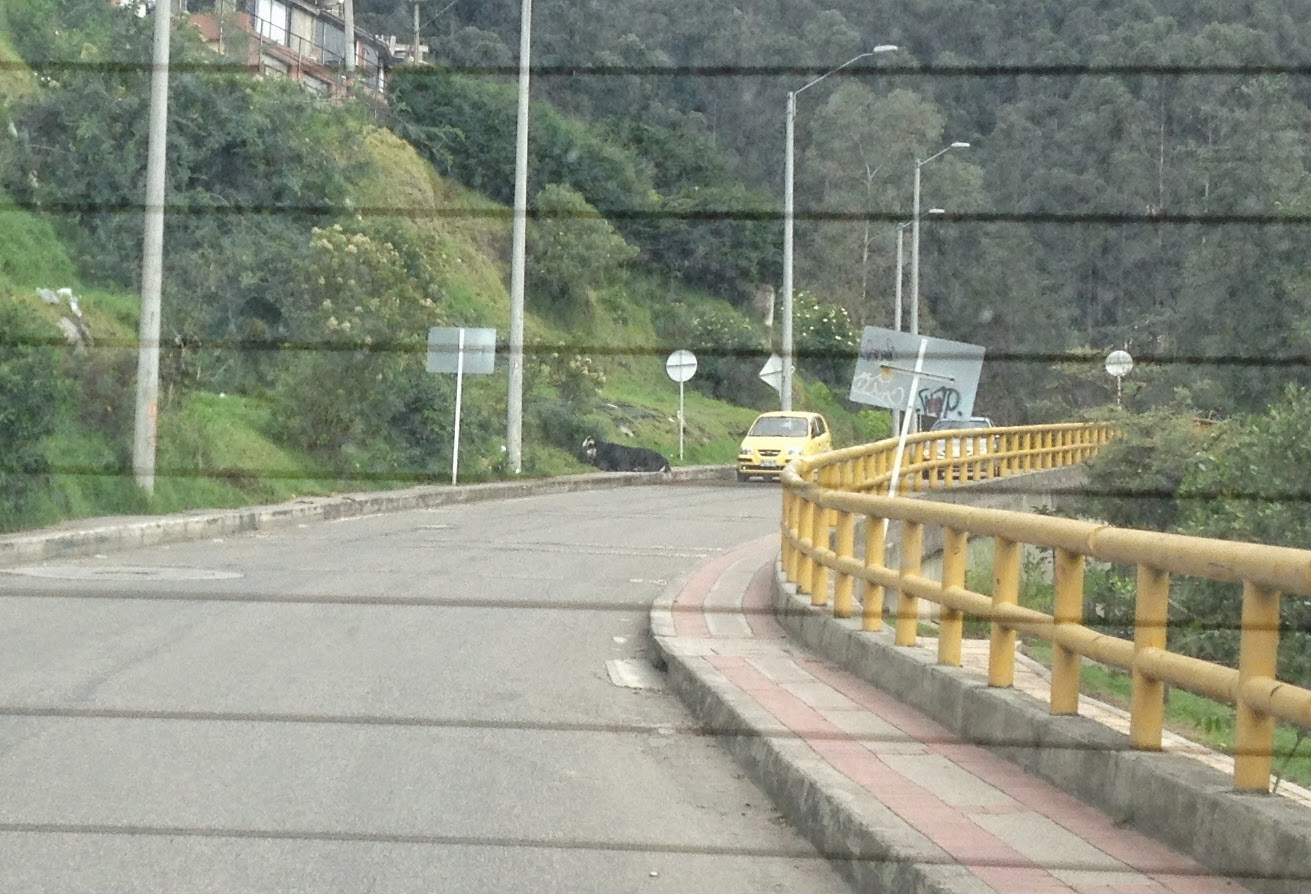 Look closely near the yellow taxi in this picture.  (Which was taken out of the rear window of the car!) And yes, that is a cow laying just at the edge of the road.  They belong to someone who lives on the mountain and the livestock simply ‘roams free’.  I had to do a double take! 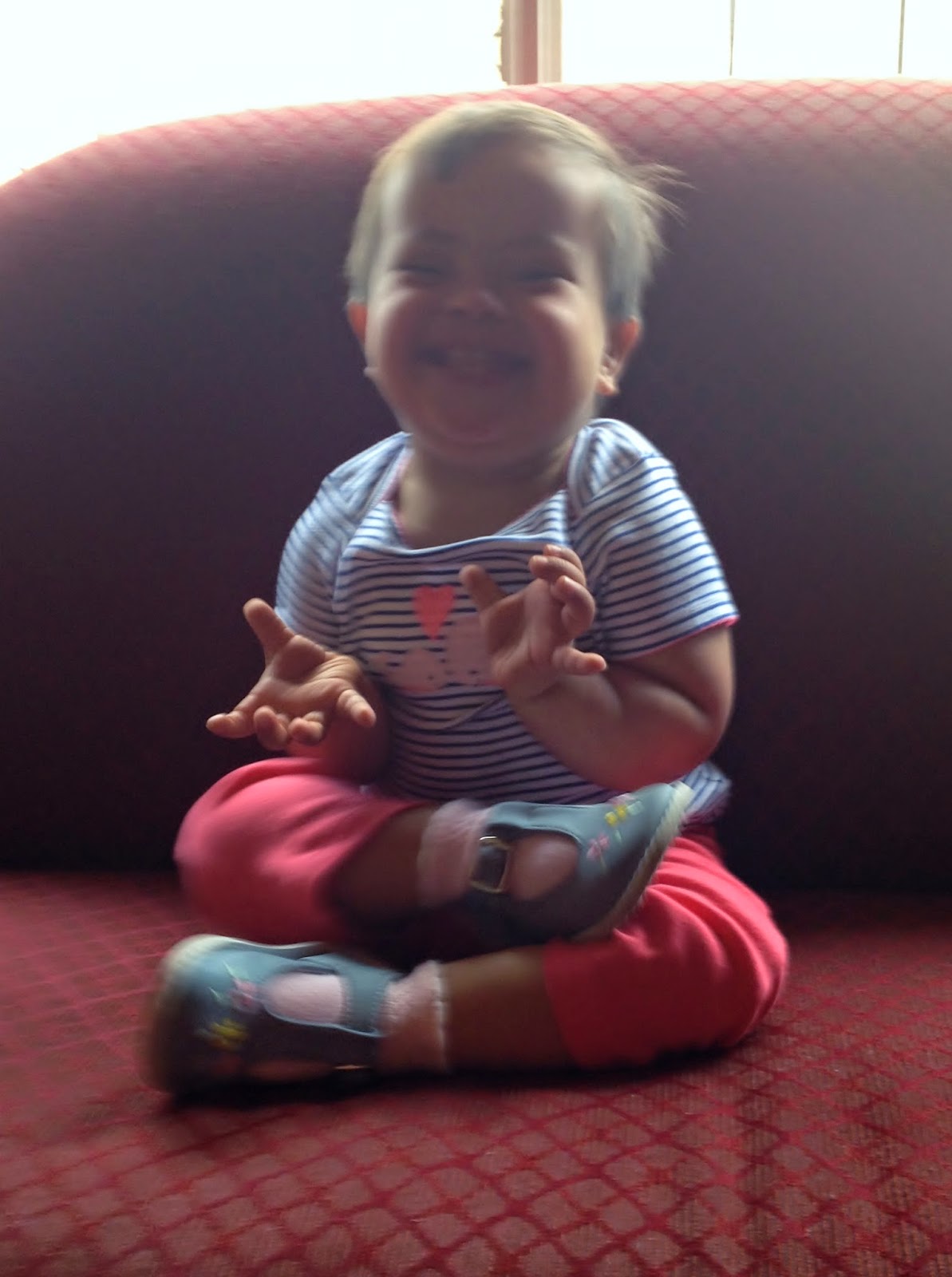 Because I certainly can’t get enough of this face, I imagine you want to see her too.  We were playing catch with a balloon (another favorite thing!) and I was relinquished to the floor so the princess could have the couch to herself.  Those are some super happy hands waiting for me to throw the balloon back!  She was so silly and happy after such a long day, even with only a 20 minute nap!  Doesn’t everyone go from Lotus pose to the splits while playing balloon toss!?!

Complete Circles: A girl and her pony