One of the requirements of hanging out here in C for so long, is that non-C citizens, must get a Colombian ID, otherwise known as a Colombian Cedula.  Because I’ll be, and I quote, ‘doing business’ here, I must have a proper Colombian ID.  It’s supposed to happen within the first two weeks of your arrival into the country.  We’d planned on getting mine last week, but well, I got J that day instead!! (no complaints here!)
So we got picked up by the in country rep, bright and early Monday morning and went to the Migracion Office downtown. 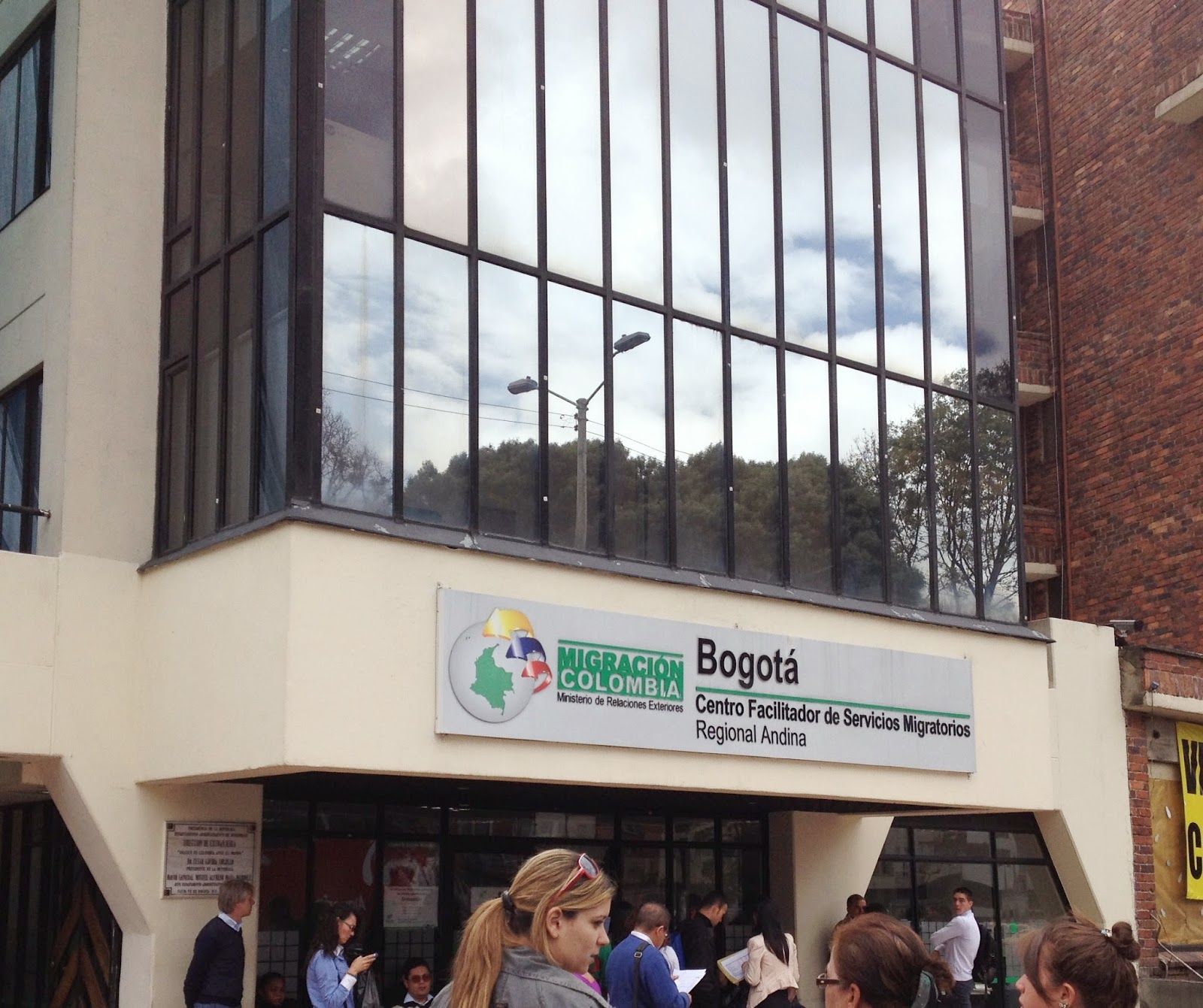 Side-note:   I am SO blessed to have such an AMAZING in country agency representative.  She has gone out of her way to assist with things because I’m here alone and because, after a week of getting to know her, it’s just how she rolls.  She’s an outright generous person and I can’t imagine working with an agency that didn’t have such an awesome rep!!

Back to the Cedula….After a bit of time in traffic, (I am amazed that there are not accidents every 10 minutes here! but my rep is a fantastic driver and I have always felt very safe in her car) we got parked and in true fashion, Soraya got us to the front of the line and we were put on the ‘expedite’ list.  I thought I had the needed items, but it turned out (after Soraya helped me fill out the application) that I was missing a photo and a copy of my visa stamp.  So, we walked down the street, where she ran into this place and made a copy and then we found the ‘photo booth’. 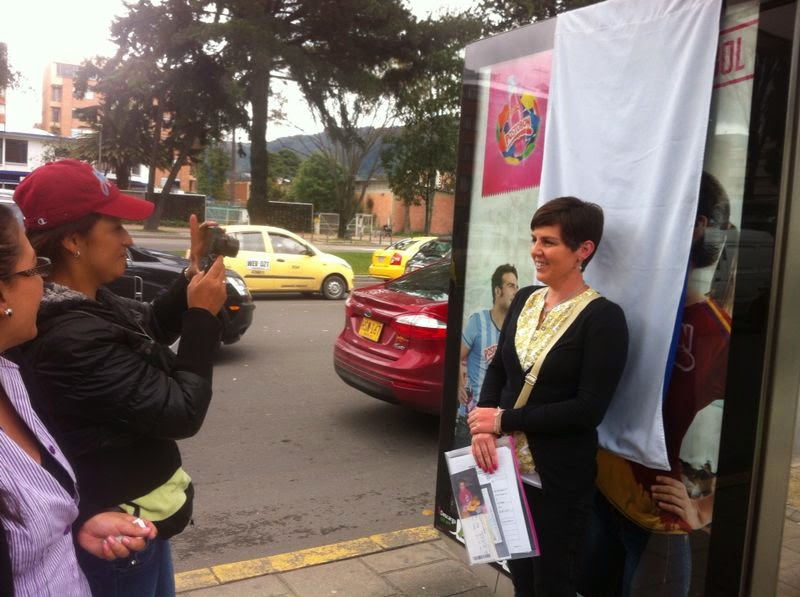 We were cracking up at this make shift photo center.  The woman simply had her printer, that would connect to her camera and a paper cutter, piled on a chair with an umbrella and a sign.  You walked a couple steps away to a bus stop, where she hung a white ‘curtain’ on the inside of the bus stop wall and there you stood on the side of the street, at a bus stop, and got your picture taken.  Soraya was laughing so hard at me as I tried do to the ‘please don’t smile for the picture face’ and she also took a picture of me getting my picture taken just to proof the craziness of this event.  Her words…”Only in Colombia”.  And I totally agreed.  (She asked if I would ever see this on the street in New York or Chicago and I commented that you’d only be getting your picture taken, like that, on the street if it was for something illegal!!)

Once we had all of the needed items, we went back to the Migracion office and again, straight to the front of the line.  (It’s funny, she just goes to the right people and says/asks the right things.  If I had had to take a taxi and do that alone, I probably would have been in line for over an hour, JUST to get the application!)  I was sent up to the processing area where, because she is already a citizen, Soraya was not allowed. But most of the difficult part of the process was done.  J and I waited for a few minutes upstairs until someone called my name, took my picture and for the 26th time, I was fingerprinted!  Another couple of minutes after that, I was called again, paid and given my receipt.  It apparently takes about 3 days for the ID to be ready, so we made a plan to come back and pick it up today (Friday) since we’d be out and about anyway for a pediatric appointment for J.

Again, some traffic…with an amazing driver…parking, Migracion office and right straight to the front. (I just should not be surprised that things get done when she’s ‘in charge’.) 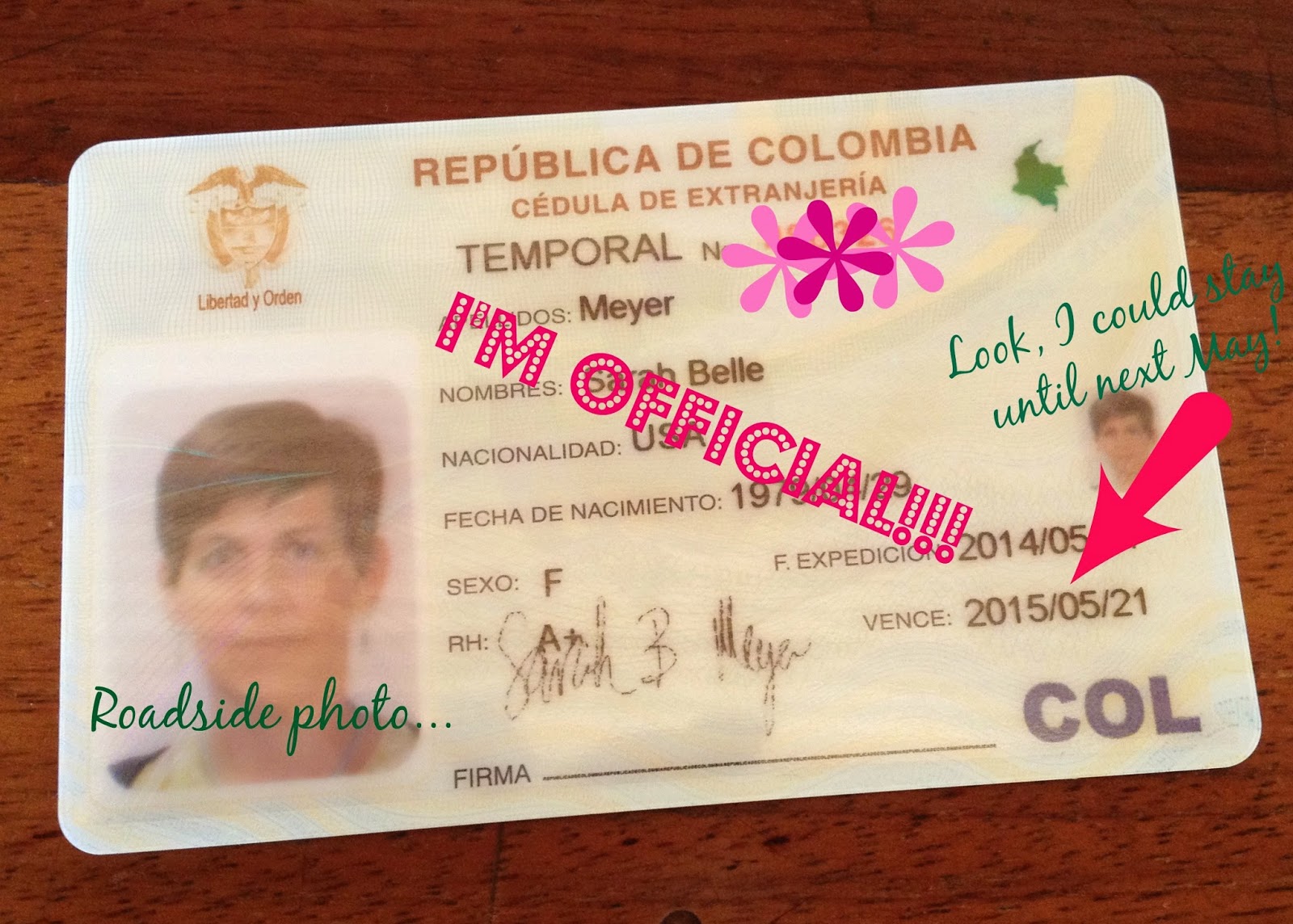 Hey, now that I’ve got an official Colombian ID, maybe I’ll hang out for a while longer.  The place does begin to grow on you.  (just kidding…well, about staying longer.  The city has started to grow on me a bit.  And the people are pretty great!)  I now have a out of the country place to vacation if I ever feel the urge.  Maybe Josie will need to visit the place where she was born when she’s 5? And 10? And 12? And 15? And…